After the Krogen Rendezvous we moved next door to Washburns. All “three” of us were going in for our annual check-ups. The girl above takes a lot more care than the Admiral or me!

It’s a bit of a step up when Magnolia is on the “hard.” BTW, we are staying at a local AirBnB while she is out of the water.

The bottom did not require a full paint but some touch-up. New zincs and props were cleaned and coated.

In addition to our own appointments we have been doing a fair amount of socializing as well, though short on pictures. We had dinner with cousins Julie & George and Dan & Lori. We also “squeezed-in” a couple of Happy Hours with Runaway (Marti & Matt) and Lali (Bill & Laurie).

During World War II, Solomons, MD was home to U. S. Naval Amphibious Training Base (http://www.wilmon.com/usnatbsmd.html)

At nearly every place we visit we find these little spots of history. One of my favorite things in the world is to walking these lands and finding there place in history. So very lucky!

The Admiral managed a brief shore-leave with her girlfriends. It looks like they had a swell time.

The and I celebrated our 14th wedding anniversary while we were in Solomons.  Knowing how to get to Annettes heart I found a place that served the best Crab Cakes and Kim Crawford wine!

I made a quick trip to FL to celebrate my Great Uncle Wayne’s 100th birthday. He is my Grandpa Emerson’s youngest  brother. What a terrific evening and so grateful to have been included. I am focused on being like my uncle!!!

I was also re-introduced to a cousin who I played with when I was little and down on the farm in Ohio. I am going to work to stay in better touch!

And if all this luck was not enough. Our friends Dan & Marcia on Cutting Class was passing though St Augustine on the same day. Time did not allow us to connect but I did manage a picture as they pass by.

I am at the airport in JAX waiting on my return to Maryland. If all goes to plan, Magnolia will be splashed this afternoon and we will move back aboard tonight and get off the dock tomorrow before the weekends blow. More soon. Be Safe A**2

Magnolia picked up anchor chain in Galesville MD and then headed south for a couple days on the anchor and then to attend the Krogen Rendezvous at Solomons Island, MD. 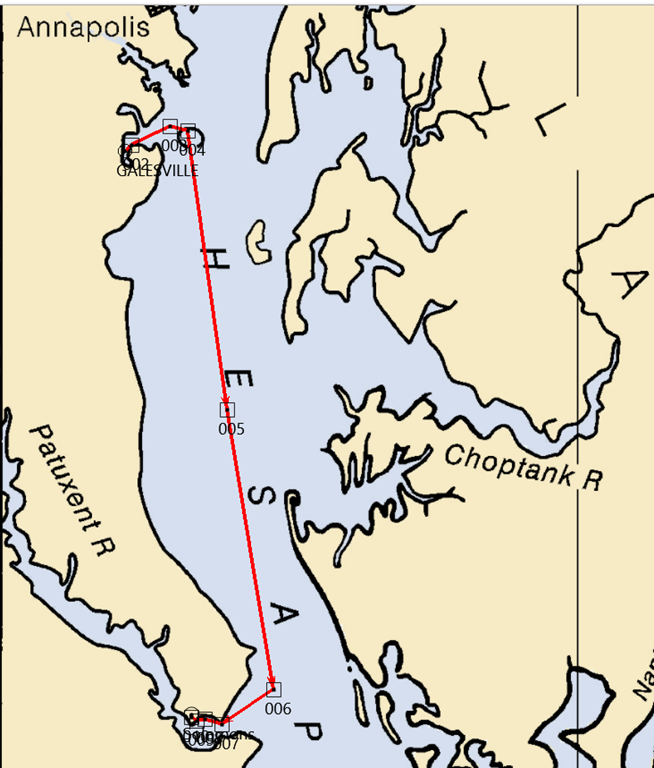 Our friend Al from Kindred Spirit came down from Connecticut to participate for the week.

We were so lucky that weather was perfect. Maybe a little warm for a couple of the days but plenty of power for the A/C! There were 44 Krogens on the docks at Calvert Marina. Here is Krogen 42/44 Alley. That is Magnolia on the left. 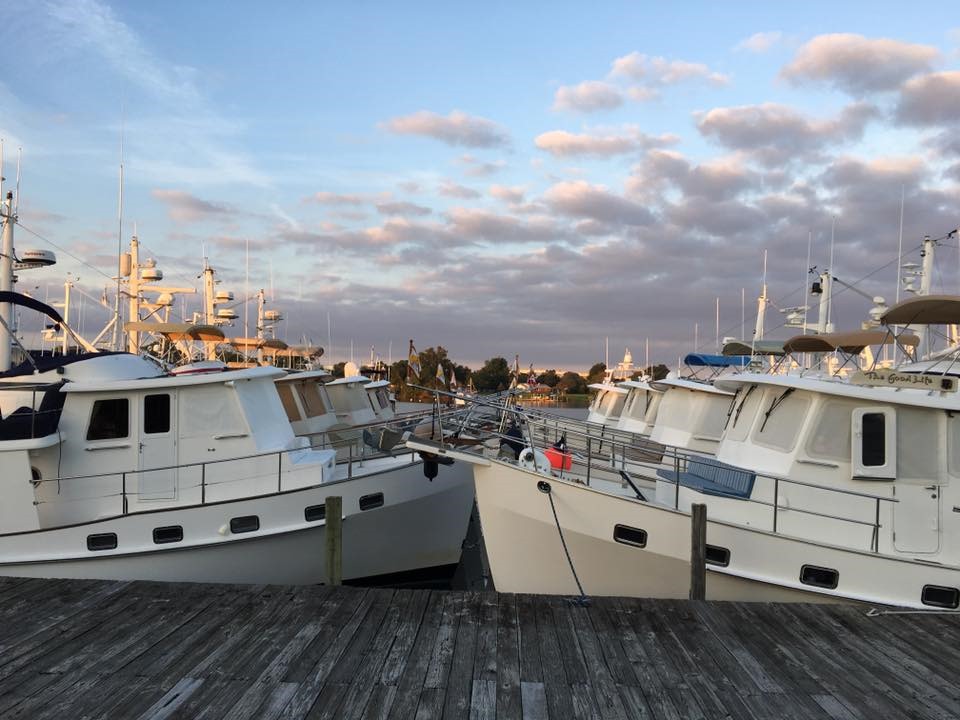 It was a great week with lots of seminars and exchanging experiences with other Krogen Cruisers.

An aerial shot of the docks with all the Krogens 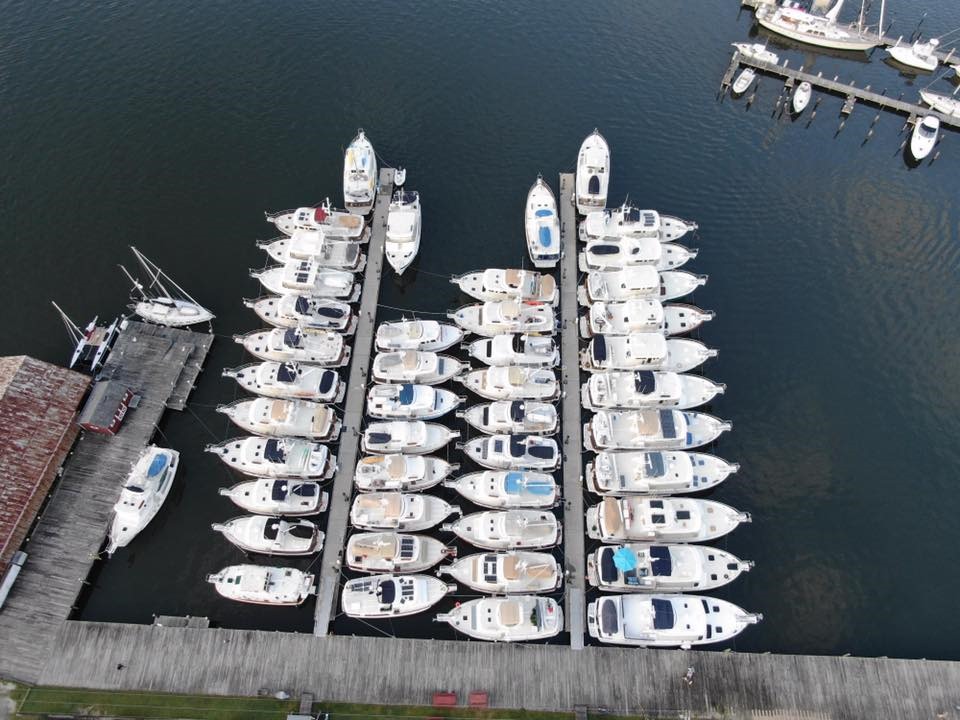 There were nightly dinners where we mixed it up with many other attendees. It was a lot fun. 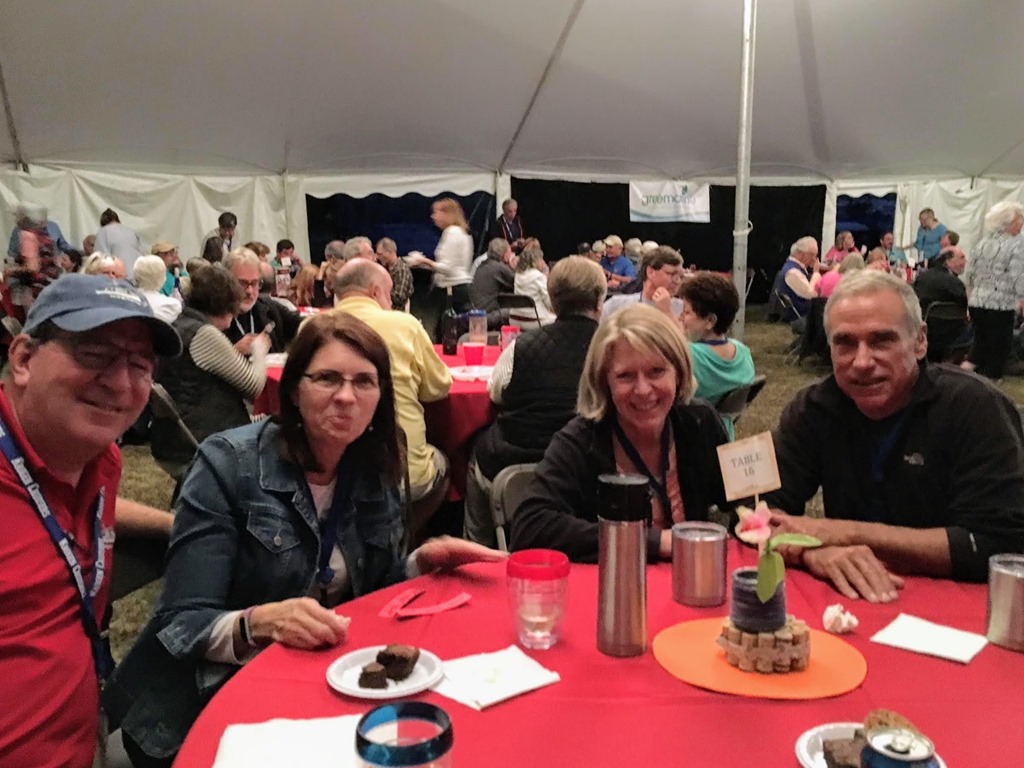 Our official ships photographer Mrs. Michele Watson. She has taken some outstanding photographs! I have to say Al Watson did catch some great shots as we departed. Not to worry Michele, you still have the job and the title! 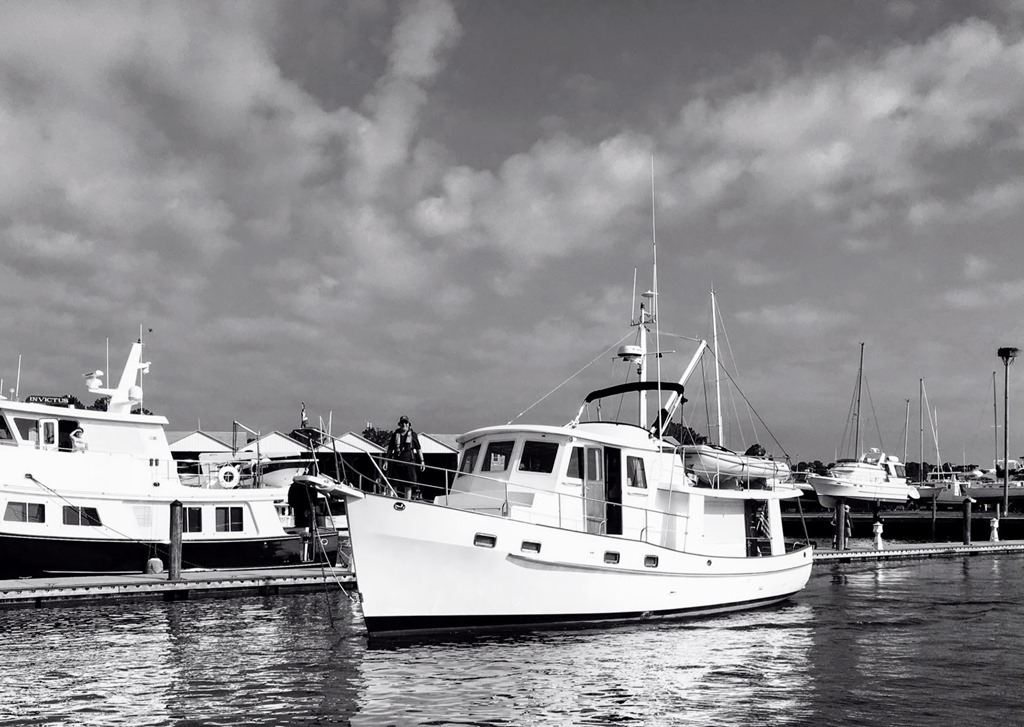 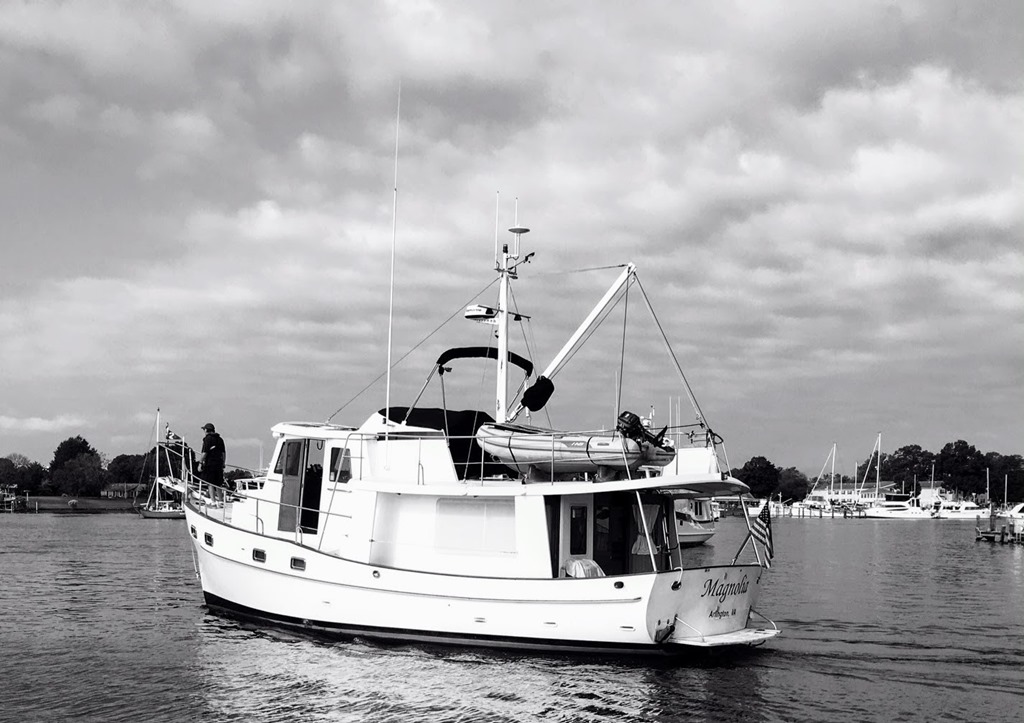 We had a terrific week and had a great time with Al aboard. It was great to see so many old friends and make some new ones… just feeling very grateful.

Kingston NY turned out to be a real gem of a stop. Hurricane Florence coupled with the unexpected loss of a dear and lovely woman it was exactly the place we needed exactly when we needed it. We had found a place that was safe and secure and where we could leave the boat for a few days without concern.  We actually stayed at two different marinas. The first further up the river right next to an ancient lock which was really cool! 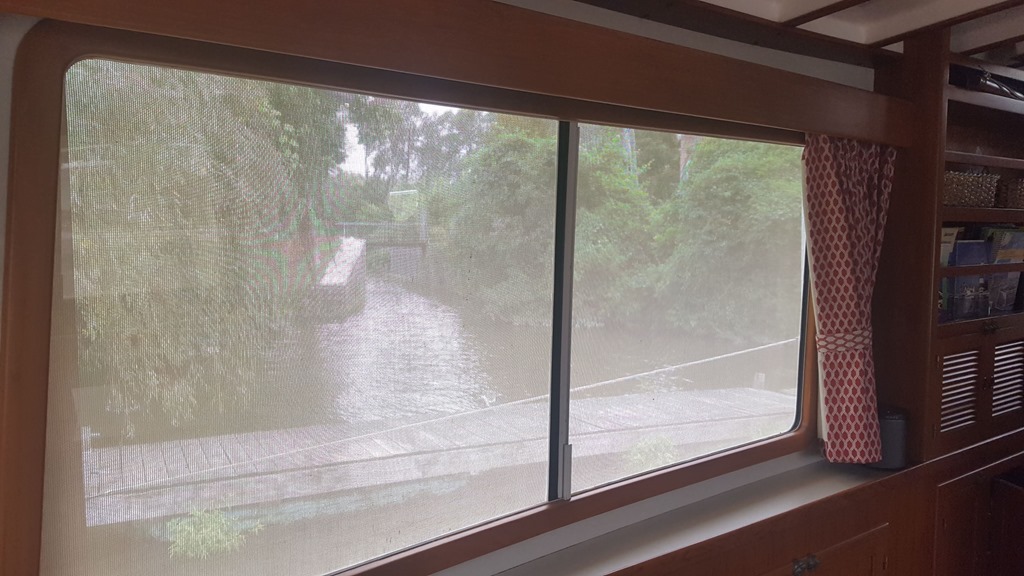 So far, so good making progress.

Have also been working on a monitor for our solar panels. It is based on a Arduino micro-controller which will talk to a Raspberry Pi single board computer via a Wifi UDP. 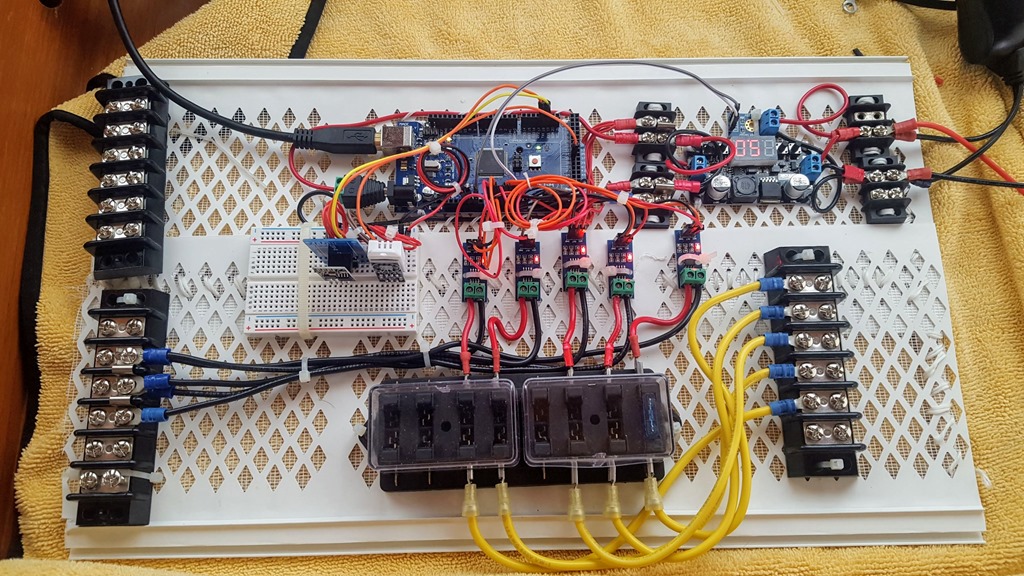 The data is displayed using Whilhelm SK on am Ipad. Enough geekdom. 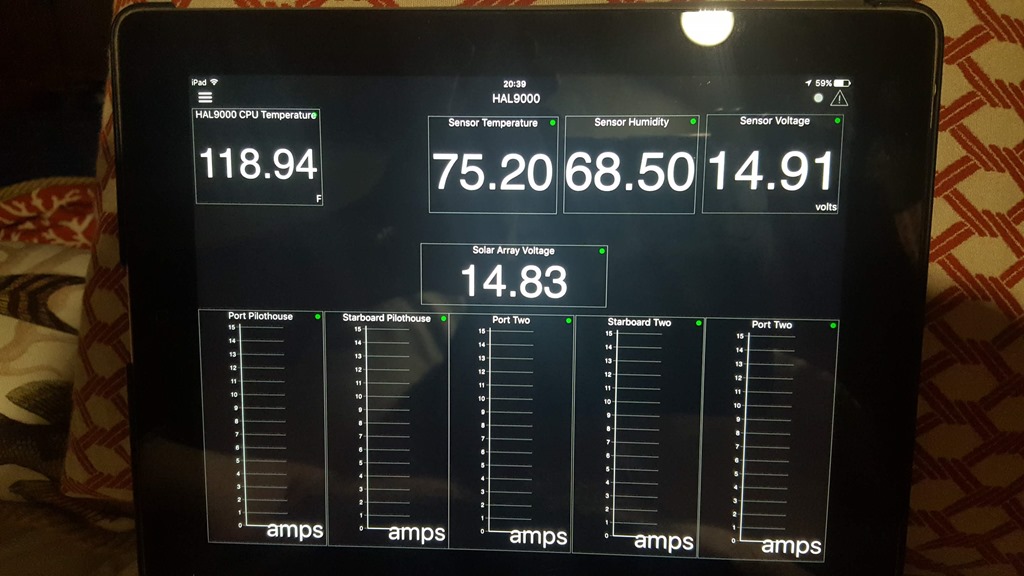 Magnolia had a terrific parking spot among the hills of New York. 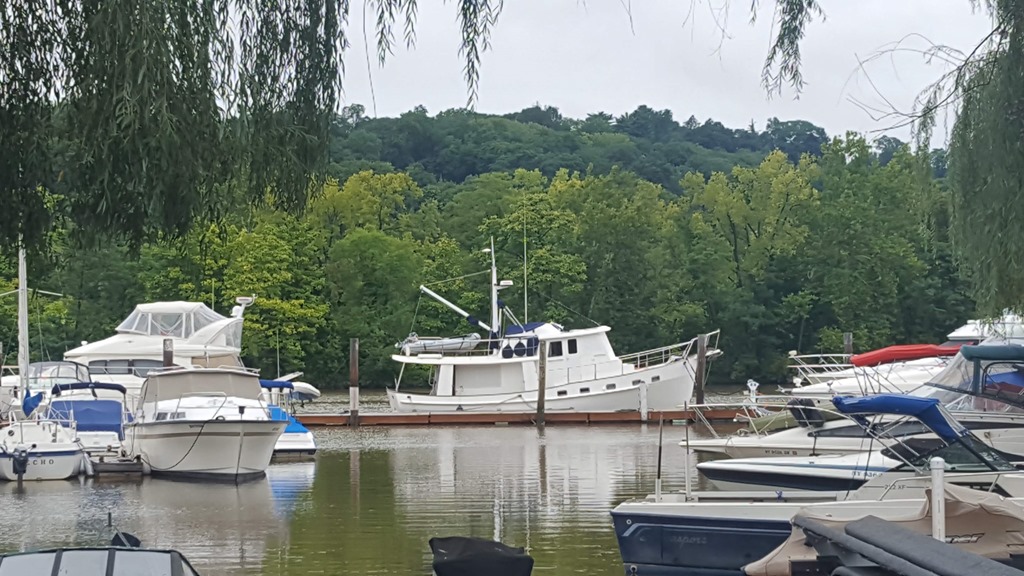 The high point of the visit though was out trip to Connecticut. We were able share a wonderful evening with Ted & Sally (Amici) and Al & Michele (Kindred Spirit) . We had such a fun time and grateful for these moments! 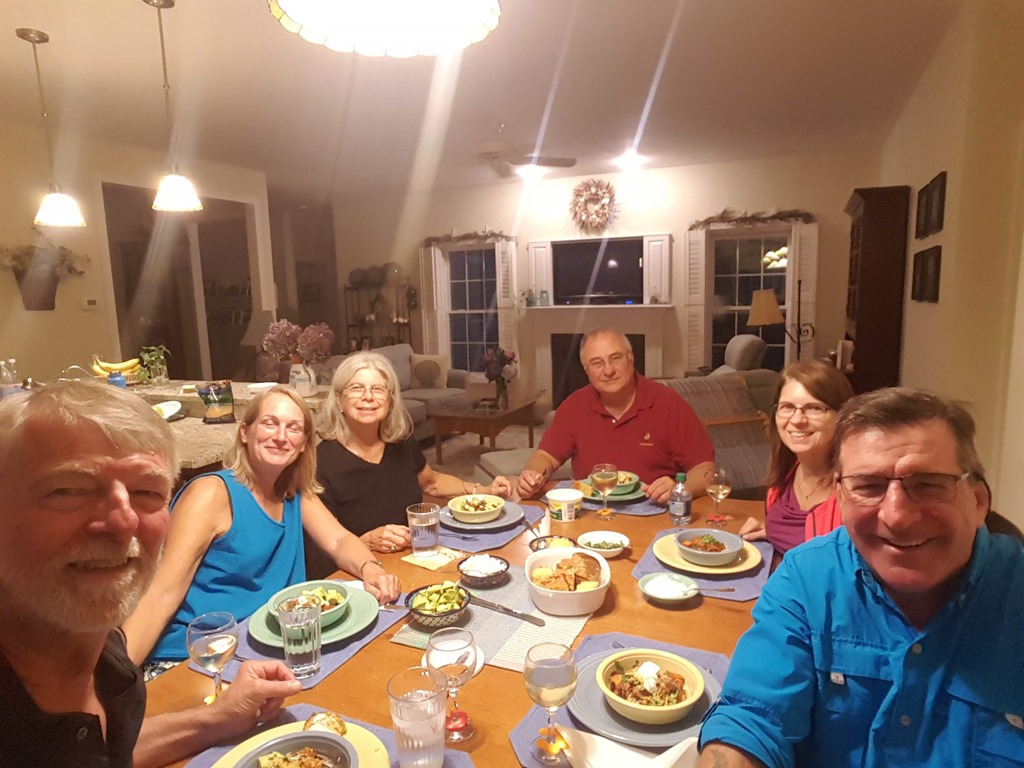 Finally we were we underway and headed for the Chesapeake. 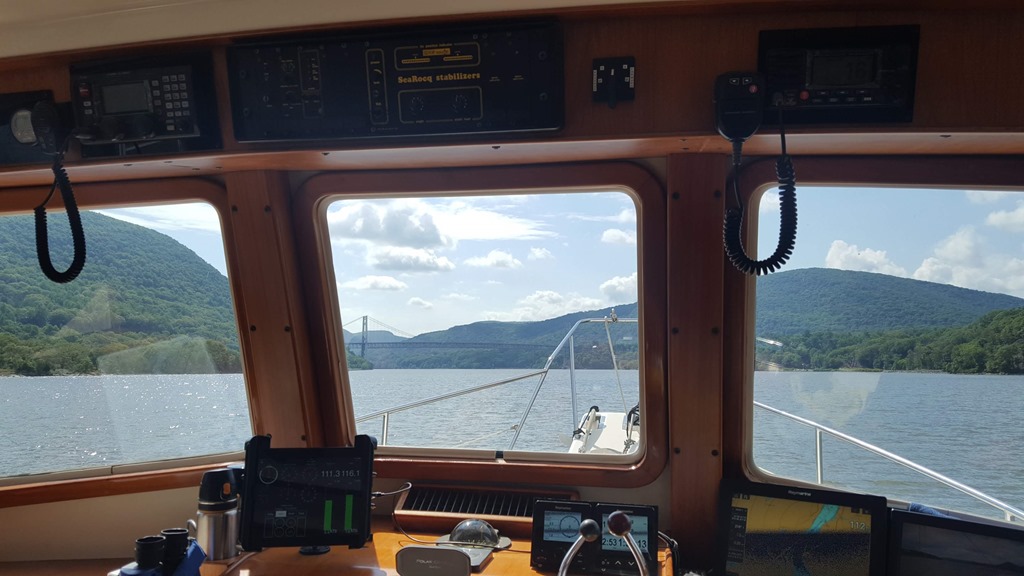 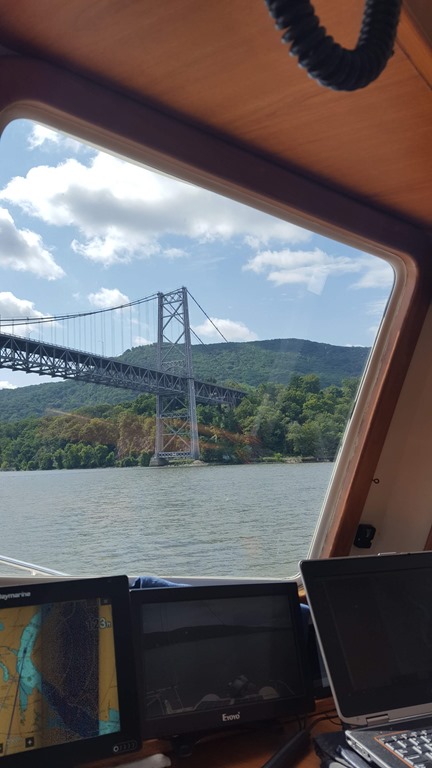 First we make a stop in lovely Croton-on-Hudson, New York but early next morning we off for the Chesapeake. 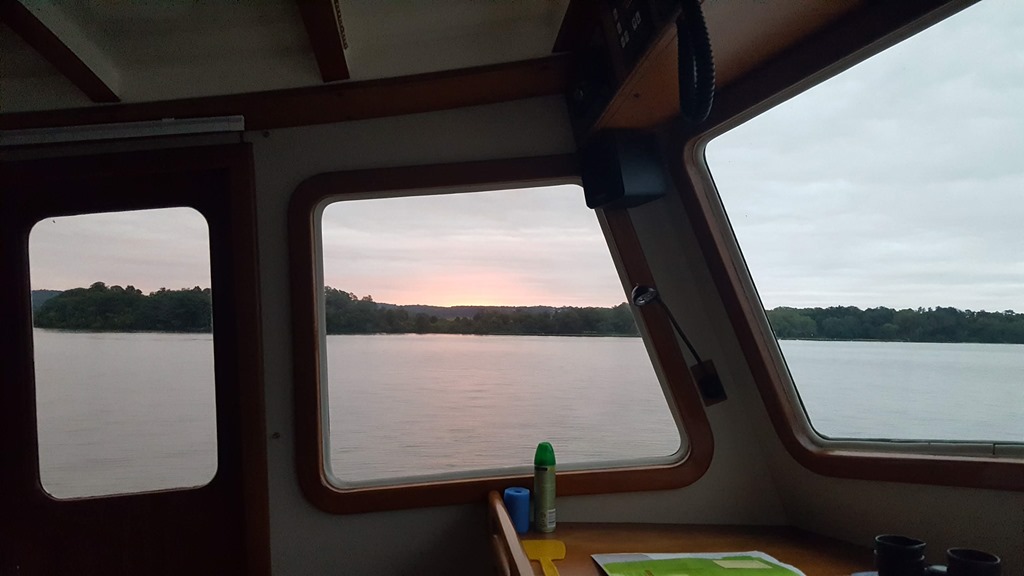 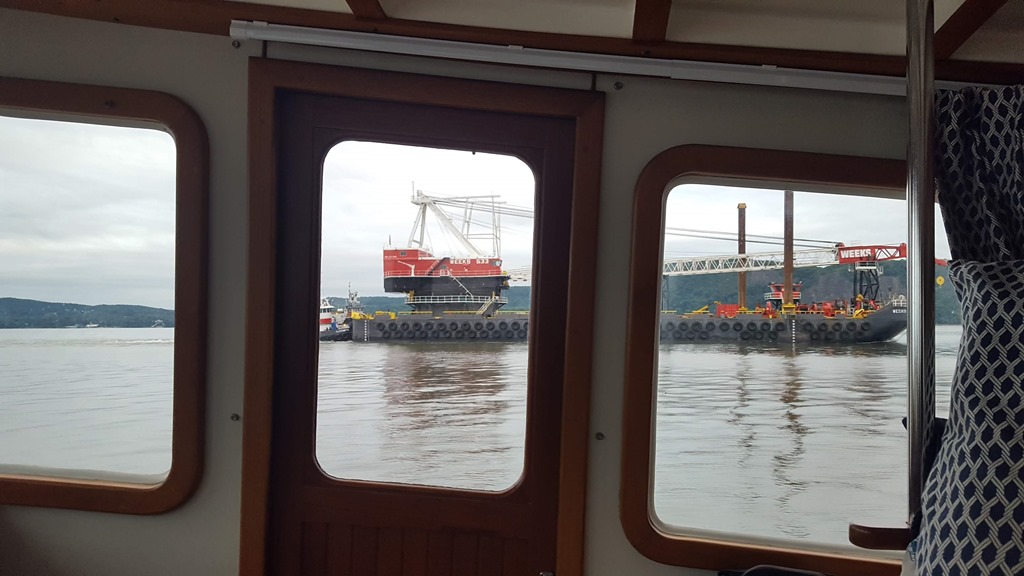 The Tampazee Bridge is under construction with limited vessel traffic which cause for a major traffic jam. 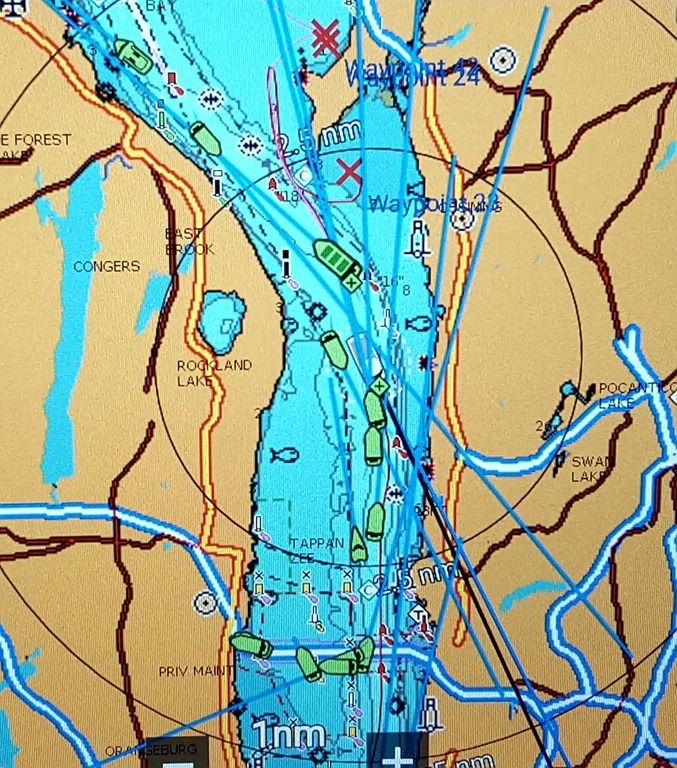 Passing the Disney Ship we were still feeling lucky to be aboard Magnolia. 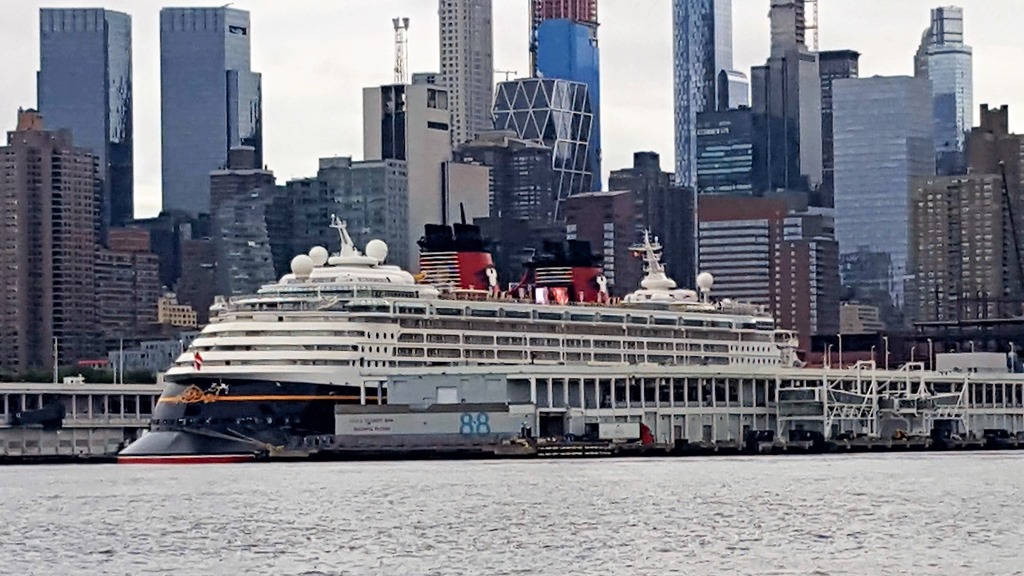 New York in the rearview camera….. 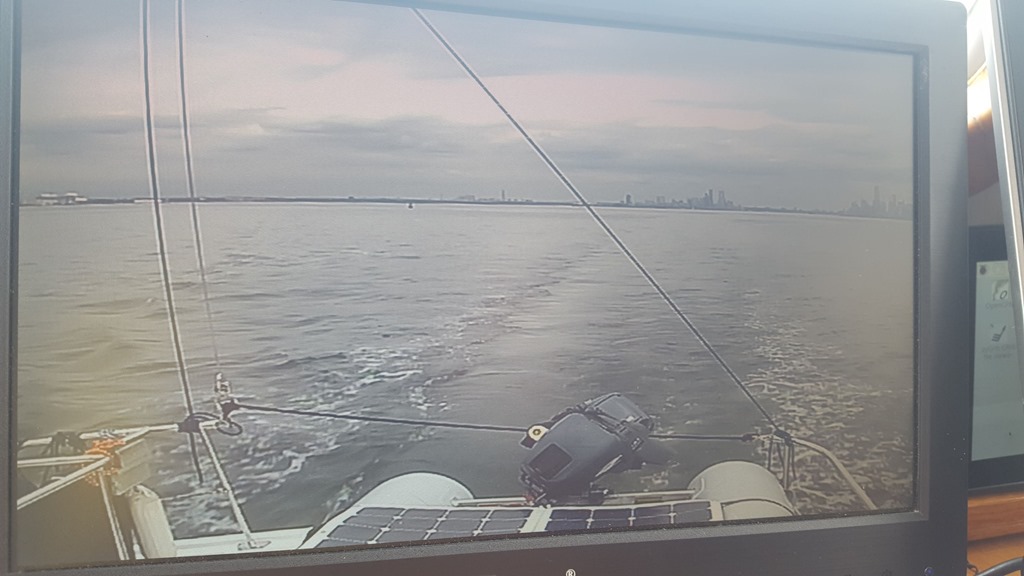 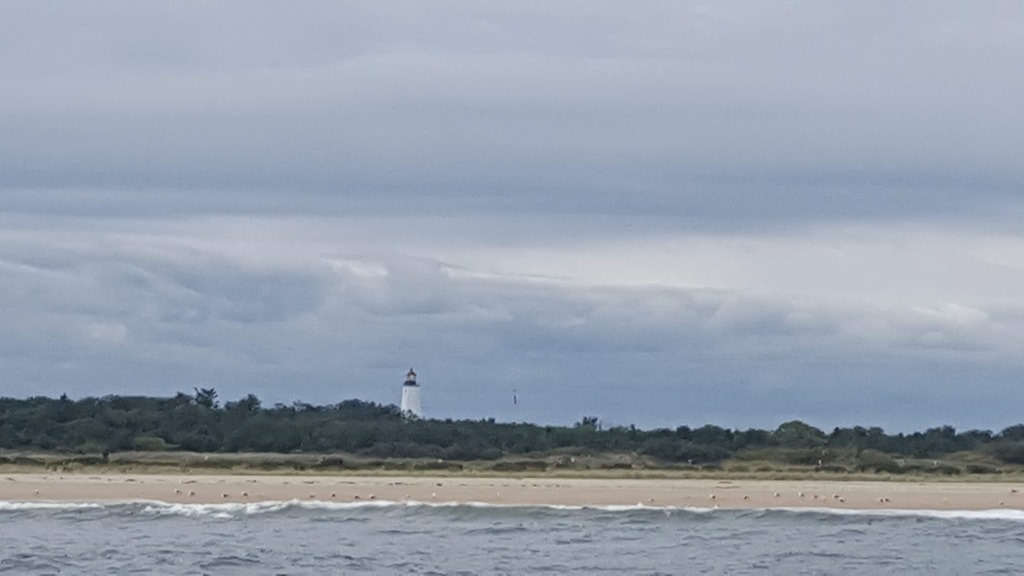 We made an overnight passage of the coast of New Jersey in not GREAT conditions but we “got’r done.” We rounded up into Delaware Bay just before dawn right into an outgoing tide. That slowed our progress to a crawl.

We arrived Reedy Point Anchorage in the late afternoon and anchored just across from the Salem Nuclear Plant….

and about 5 miles south the Delaware Memorial Bridge at Wilmington, Delaware.

The next day we had favorable conditions so made another long hop down the Chesapeake Bay to Annapolis, Maryland 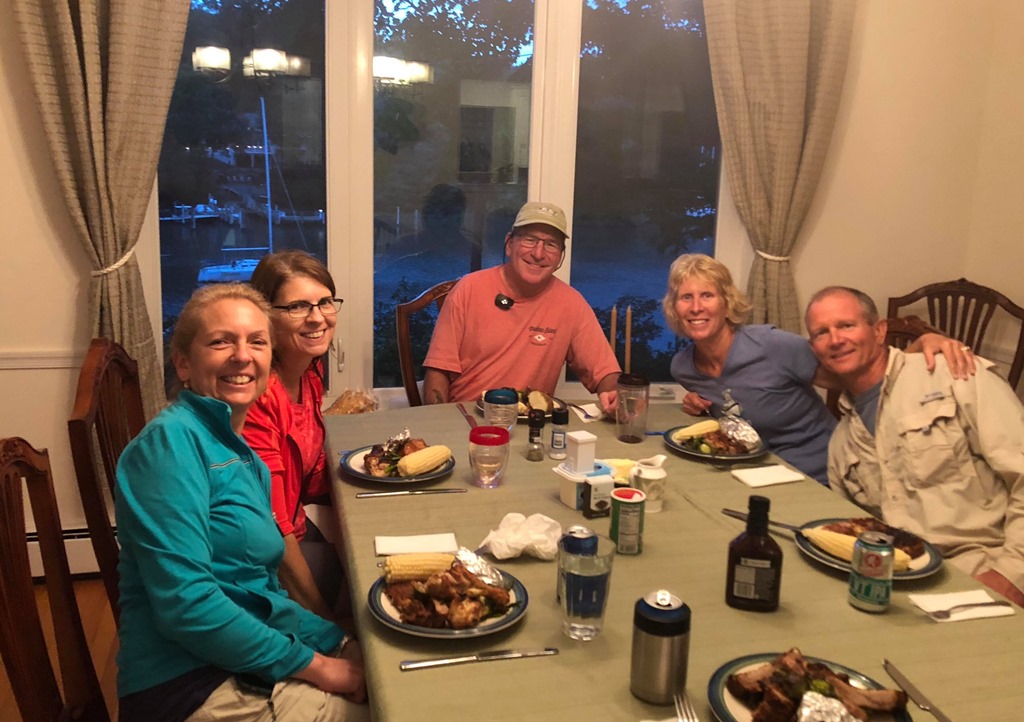 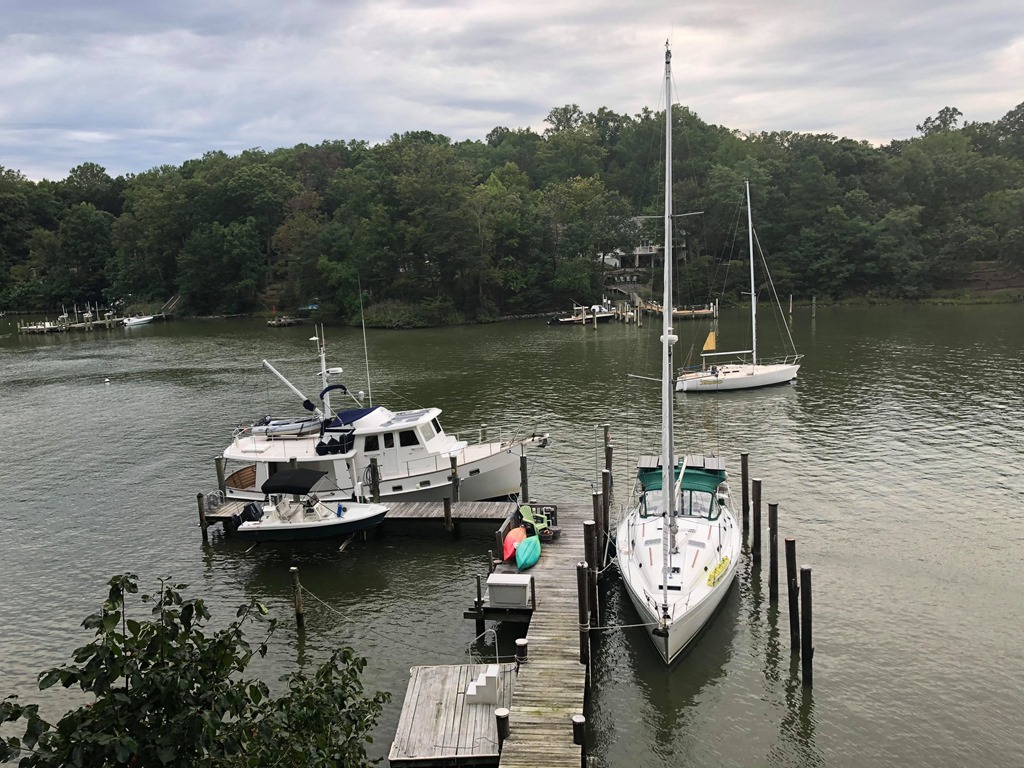 After spending a couple days with Frank and MaryMarie it was time to move down to Galesville, MD where we were getting 300ft of 3/8-G4 anchor chain. It also allowed us to catch up with Burt&Prue (Exuberant), Ron&Nancy (Mandala) and John&Lizzy (Quetzal) 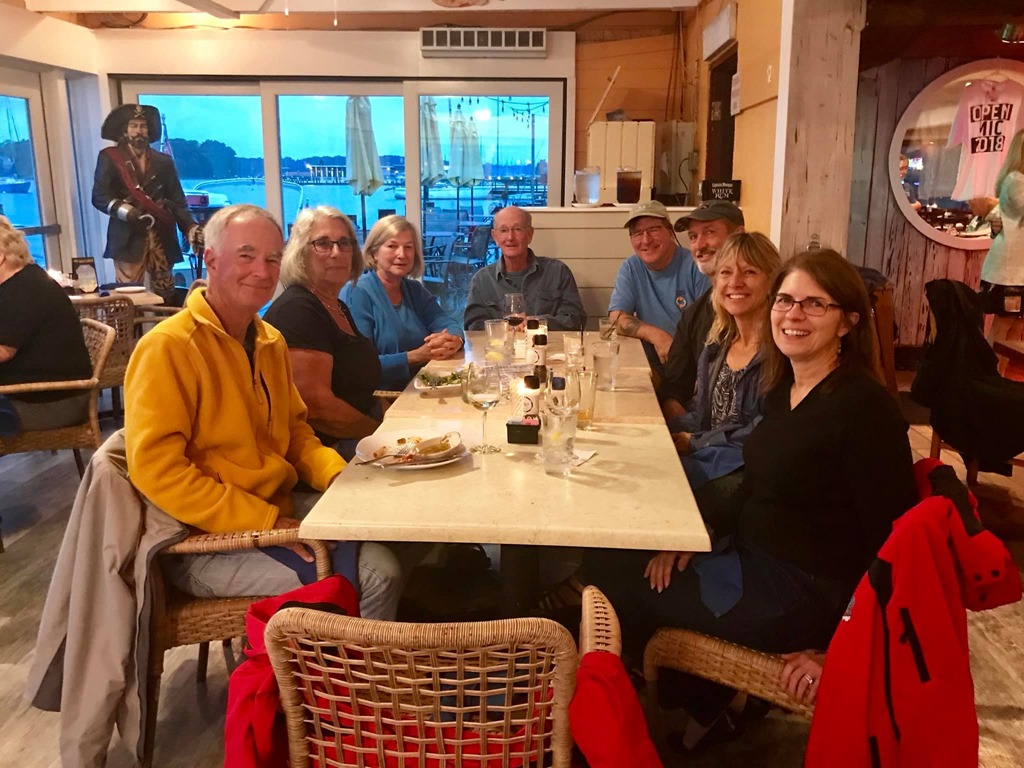 After 6 years, I finally feel like we have slowed down and finding a good rhythm to balance seeing friends and the need to move when the weather is good.  It is good to be back in home and familiar waters but this summers trip and was an amazing experience. It was so wonderful and we are so appreciative of those of you we were able to see and the time and effort you spent to come see us along the way. 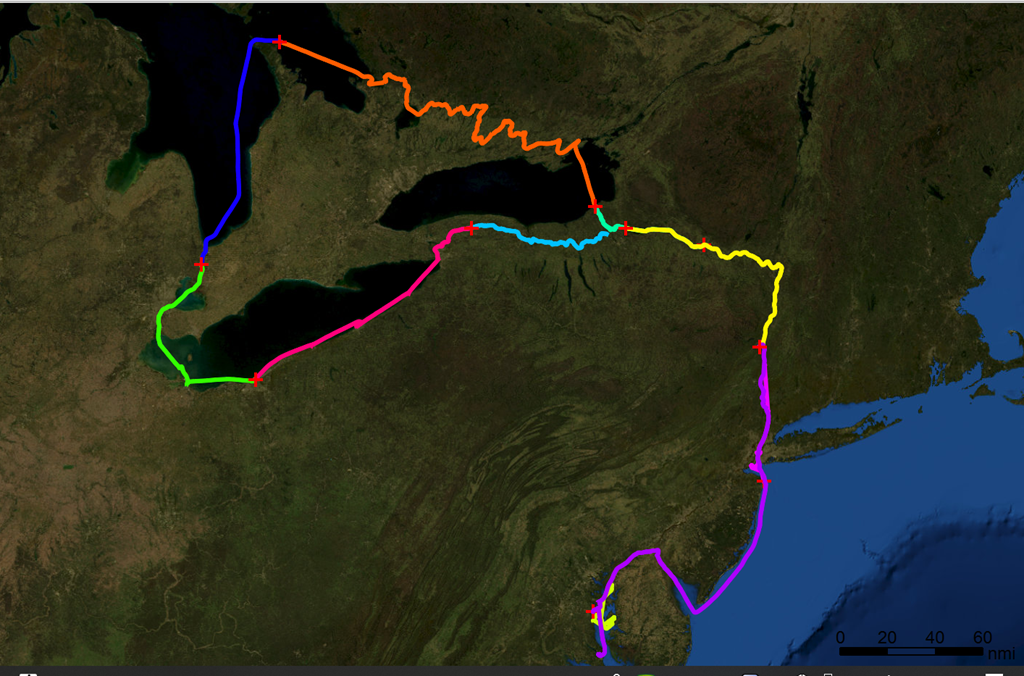 This is certainly an adventure we will not soon for get!