Ok, perhaps we are not at Crunch Time yet…..but I can see it from here! As the calendar counts down I can feel the first inklings of dead-line anxiety! We hauled (pulled out of the water) Magnolia a little early this year because we wanted to address some deck issues namely lifelines, lifeline stanchions and some less than perfect teak work.

We removed the lifelines and will fabricate new ones over the winter. The lifelines in conjunction with the stanchions are the last line of defense to stay aboard Magnolia in the midst of an unfortunate accident. I joke that the only rule on Magnolia is to stay on the boat and those lifelines are your last shot! The lifelines are made up of stainless steel cable, some are coated in a plastic sheath others are left bare. Coated or uncoated is a religious question and this blog does not address religion or politics so that is discussion for another blog.

Stanchions though, well there is no debate there. They need to be securely as possible attached to the boat. The best way to do this is called thru-bolting, where a bolt is passed through the stanchion plate, through the deck, through a metal plate under the deck and finally having washer and nut added with sufficient bedding compound (caulk) to make it all water proof. 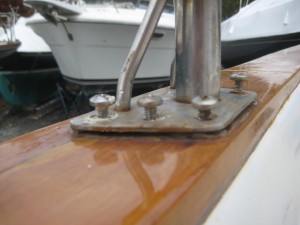 As can be seen, of the three screws only the middle screw is a thru-bolt while the outer screws simply penetrate the teak cap rail. The preference would be that all 6 were thru-bolts (3 on each side). We at least have the two and frankly we will take that. Sadly at some point in the past the stanchions were removed the nuts and washers were never replaced on the thru-bolts. MAJOR safely foul there. Even worse I had a piece of teak replaced last year and the gentlemen that did the work (a “Maritime Industry Professional”) used 6 wood screws not even attempting to thru-bolt the stanchion. That was a DOUBLE MAJOR safely foul. He endangered us and everyone who sailed on Magnolia and will never get near another boat of ours as long as I live!  I will stop now but check with me before you have work done by a yard in the West River area.

The picture above looks pretty “poopy” but actually things will be looking MUCH better after a little cleaning, polishing and sanding. More importantly once Annette and I get the stanchions re-installed with proper thru-bolts and backing plates we will be MUCH safer too!

As soon as we get the deck chores done we will have the shrink wrap applied and move onto our below deck chores. The first one, Sewage System Improvements! REALLY excited to get into that one!

On the lighter side most people know how much Annette & I consider ourselves amateurs regarding our sail boat undertaking. We have come huge distances because of our mentors who have given SO MUCH of their time and from books of experienced authors that we consider our text books. Nigel Calder, Beth Lenard, Lin Pardey and the writings of Greg Rodgers are among the writings we keep close at hand. As luck would have it on my first visit to Magnolia since being hauled I saw an unusual but familiar hull shape right next to us. A quick view of her transom confirmed it was “S/V Hawk”, the boat sailed by Beth Lenard and her husband Evans Starzinger.

Obviously I am referring to the boat behind the trailer boat! Hawk has sailed all over the world and even around Cape Horn which is scary just thinking about it. I have a included a link to their travels here: http://www.bethandevans.com/map_voyage.htm.

Beth & Evans were working on Hawk as Annette and I were on Magnolia. We had to  introduced ourselves! They asked about Magnolia and complemented how great she looks for 22 years old! Our mentors Greg & Marie aboard Second Sally were anchorage mates with Hawk during last year during hurricane Irene. Beth & Evans were very kind and also quite interested on how we got to where we are in regards to training and such. I will add a link to Hawk as well. http://www.bethandevans.com/hawk.htm

I am sure you will be looking forward to that article on Sewage Systems so just be patient!

Magnolia has been extremely blessed when it comes to Hurricanes! Last year Magnolia and I weathered Irene together but this year with Sandy things were different. Sandy was expected to be much worse and with the Irene experience I learned once the storm showed up, well there is little you can do. THE HURRICANE GAME IS WON OR LOST BEFORE THE STORM SHOWS UP! It is clearly all in the preparations. My parents were in town to visit my niece on Friday night so first thing on Saturday Annette and I got right to work by removing the head-sail, top side canvas and stowing the dinghy on the forward deck lashed down.  I returned to Magnolia on Sunday to take one more look around and double checking all was secure. Even a day and half before Sandy’s arrival the atmosphere was turbulent!

Sandy thankfully came ashore (Cape May, NJ) well north of our location at Galesville, MD. This meant that rather than having water pushed into the Chesapeake Bay at the same time we had the strongest winds the water would actually be “sucked” out. Notes: It’s a WHOLE lot easier to deal with too little than too much water, particularly when the wind is blowing 80-100mph! Once the storm had passed that’s when our high water conditions came to be with the water being “pushed in” by the strong southerly winds. We left the mooring lines a little long and Magnolia rode through just fine. Our friend Wes went to check on the boats and was kind enough to send us some “proof of life” photos. Over night the water was somewhere between 18-24 inches ABOVE the dock deck.