Magnolia departed Osprey Marina with enthusiasm and with a little sadness after making such nice friends during our stay. We are hoping everyone can meet up in the Chesapeake before long though! B 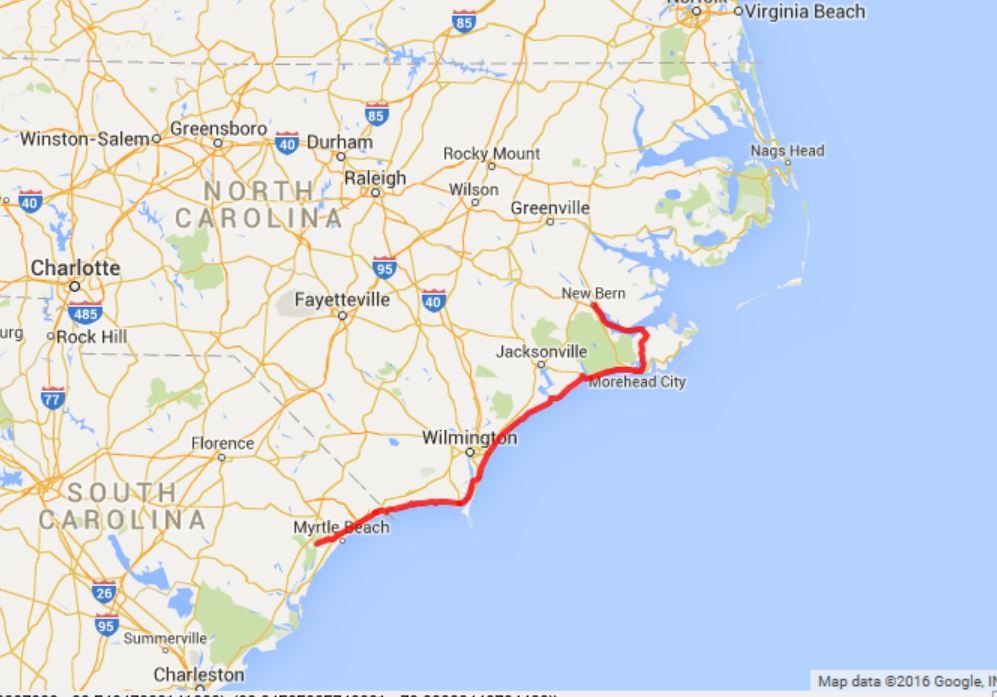 Out recent passages take us out of South Carolina and a good portion along the North Carolina Coast. From Beaufort/Morehead City we turned more inland as the Inter-Coastal Waterway turns more inland towards Virginia.

Our first day passage was actually rather anti-climatic…it was nearly 2 miles! Magnolia had been at the dock for nearly 5 weeks so we wanted to get out on the hook and check things over to be sure all was in order before getting to far down the road. We checked out our mechanical to include stuffing box cooling and generator running along with our solar system and our updated ground tackle which I will cover in the next blog.  All was in order so the next morning we were underway in earnest and the day just became more and more exciting…. 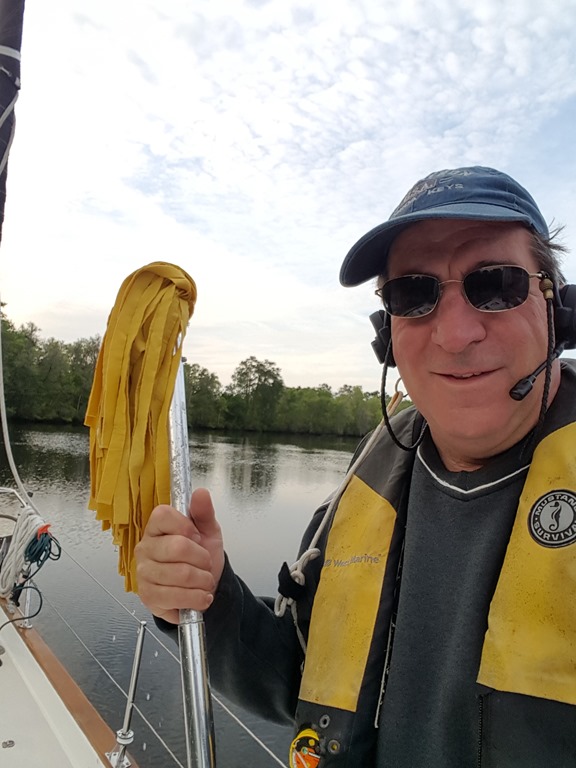 First though, this is my Captain Ron, “You do a good job, and you get a better job” picture. After 35 years you would have thought I could have gotten a better job than still swabbing the decks!

Our first day out was a little 25 mile hop up to Myrtle Beach Yacht Club. The term Yacht Club does not accurately describe the destination. The destination is though the current home of the previous purveyors of the “Jugg Handle Inn” @ routes 73 & 130 in New Jersey. The wings have not lost a beat in their trip south…but digress. 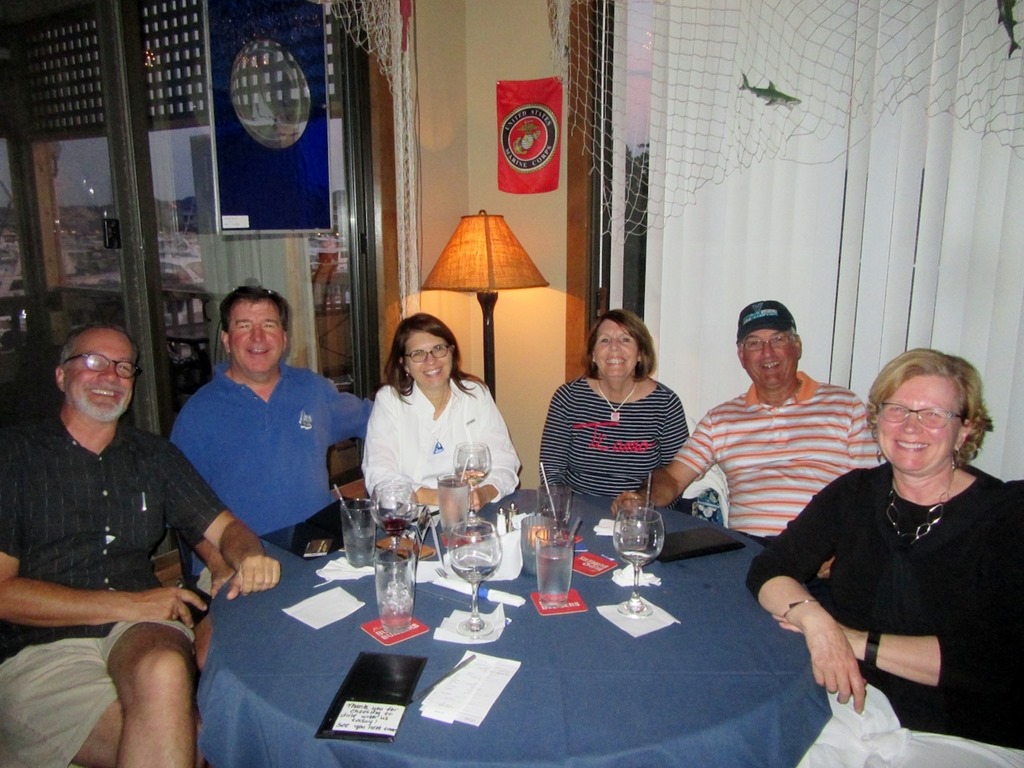 Our friends Joe and Christine Volpe from South Port saw the wing post and wanted it too! In addition our friends from Belle Bateau were making such good time they continued on and joined us as well!  (Photo Cheryl Duvall) 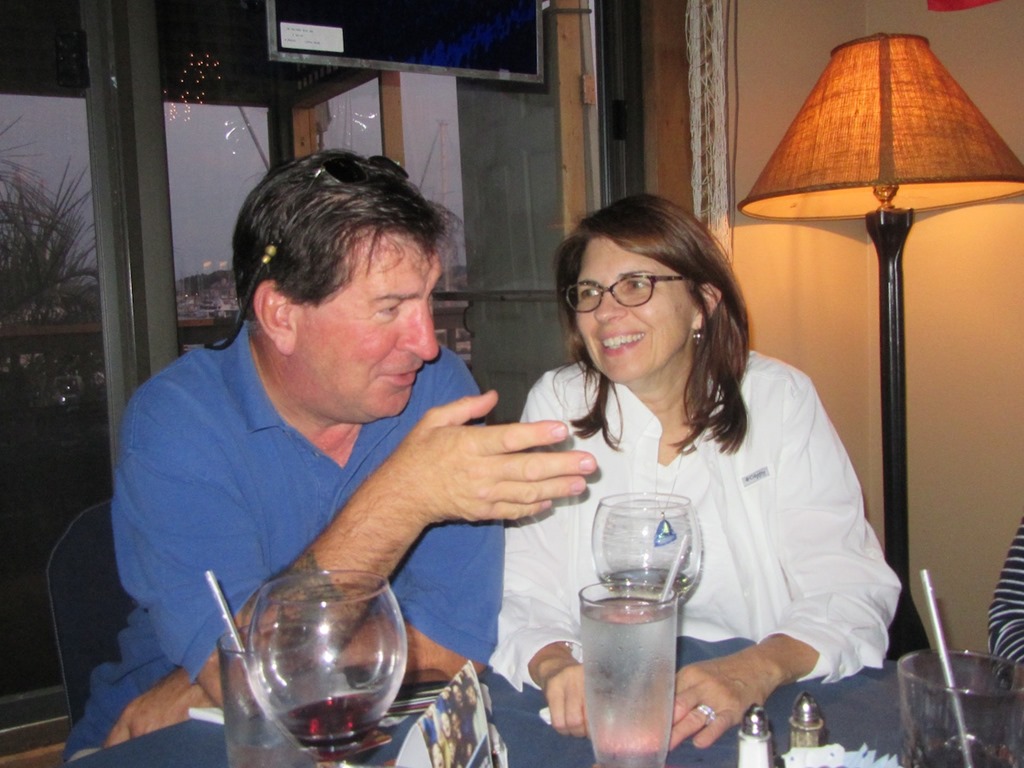 Anthony is obviously pontificating on some self described important issue and as usual the Admiral mesmerized by what she is hearing…..(Photo Cheryl Duvall) 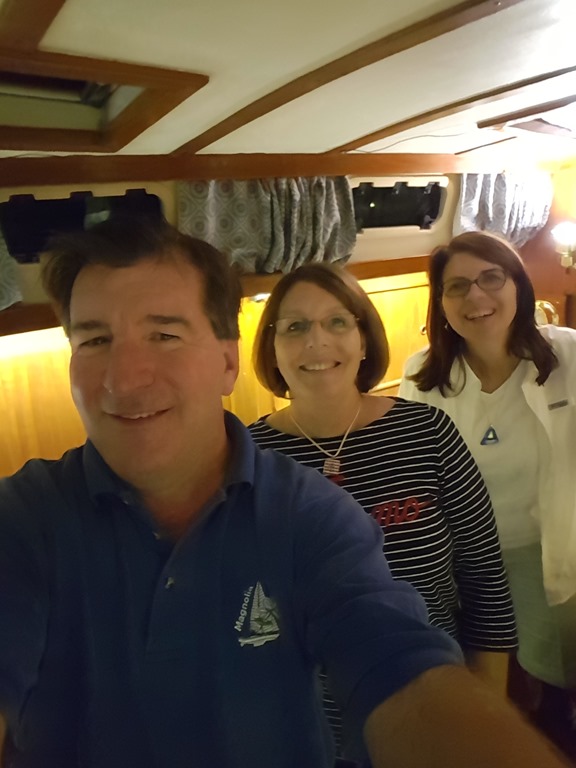 As the evening was winding down it was decided since Joe was playing in a Golf Tournament in the morning that Christine should just stay aboard and supervise our passage to South Port. We had plied Christine with just the right amount of wine…enough for her to go along with the idea and not enough to make the trip uncomfortable. It was a great evening and morning passage….and on top of that, the weekend was just beginning! 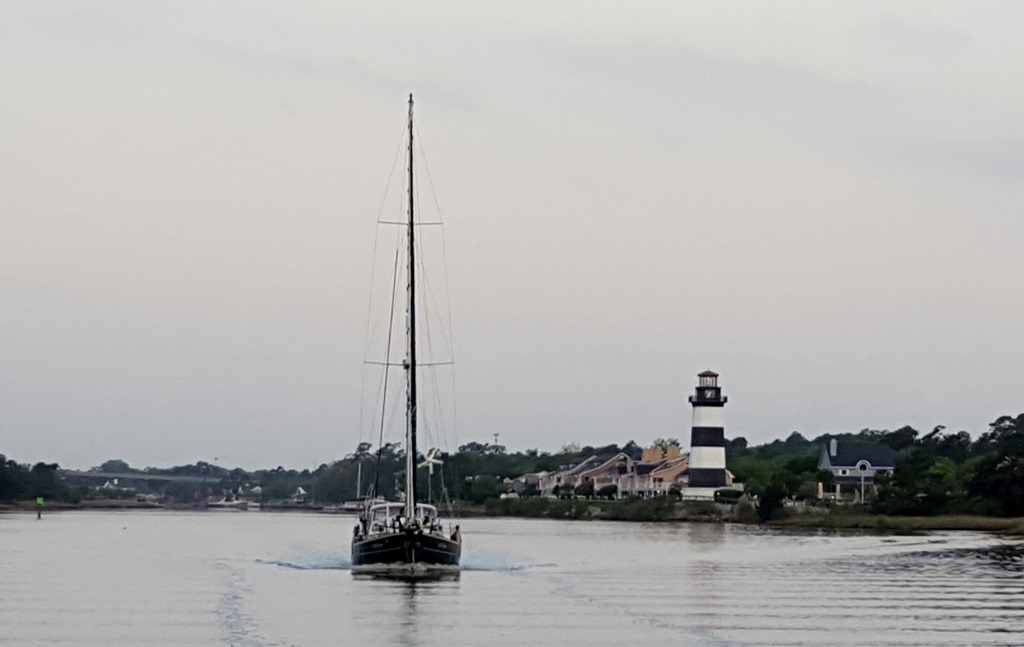 Belle Bateau underway from Myrtle Beach on the ICW 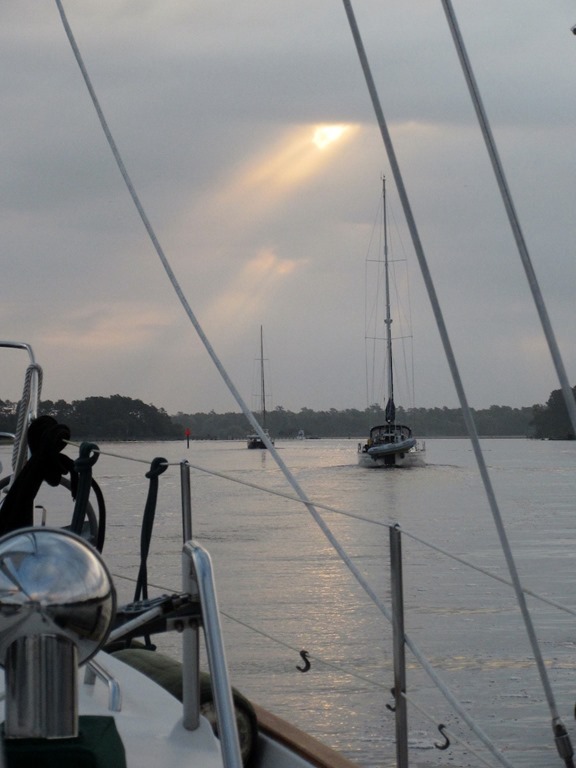 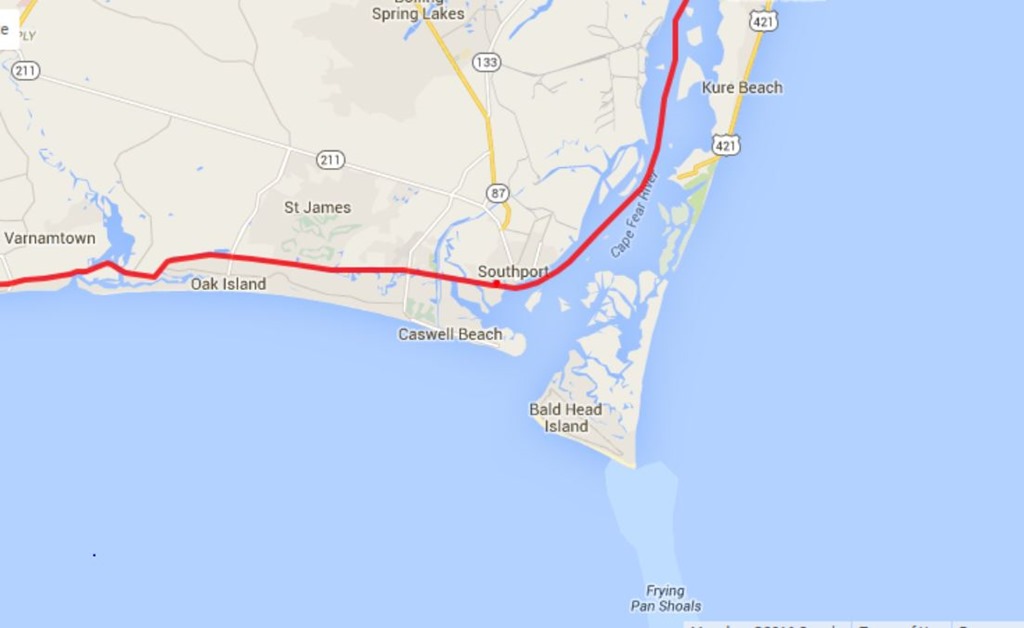 Magnolia and Belle Bateau had a lovely passage to South Port in spite of the occasional shoaling conditions along the NC Coast. 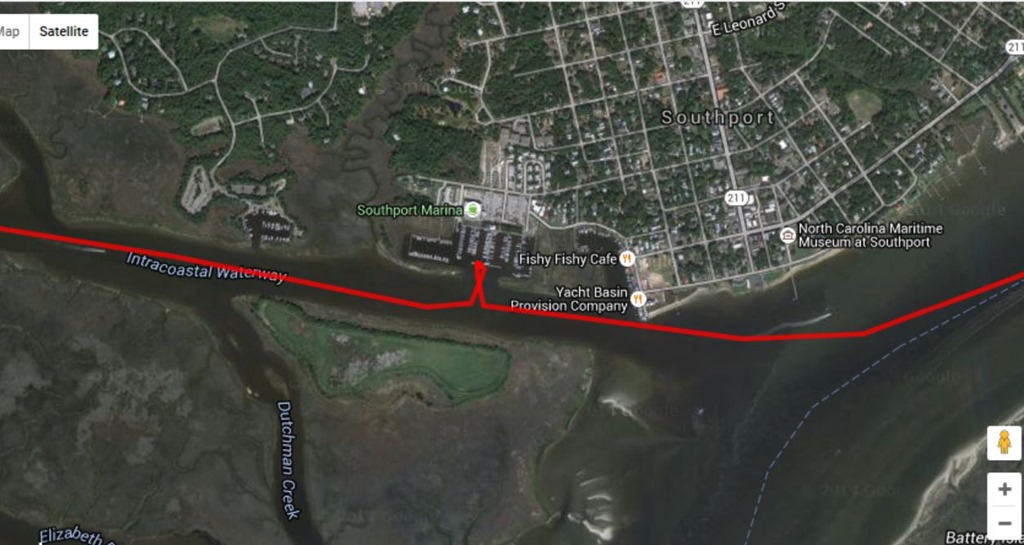 Our friends Jack and Kathy arrived from NJ soon after our arrival and we shared a terrific evening of comrade! 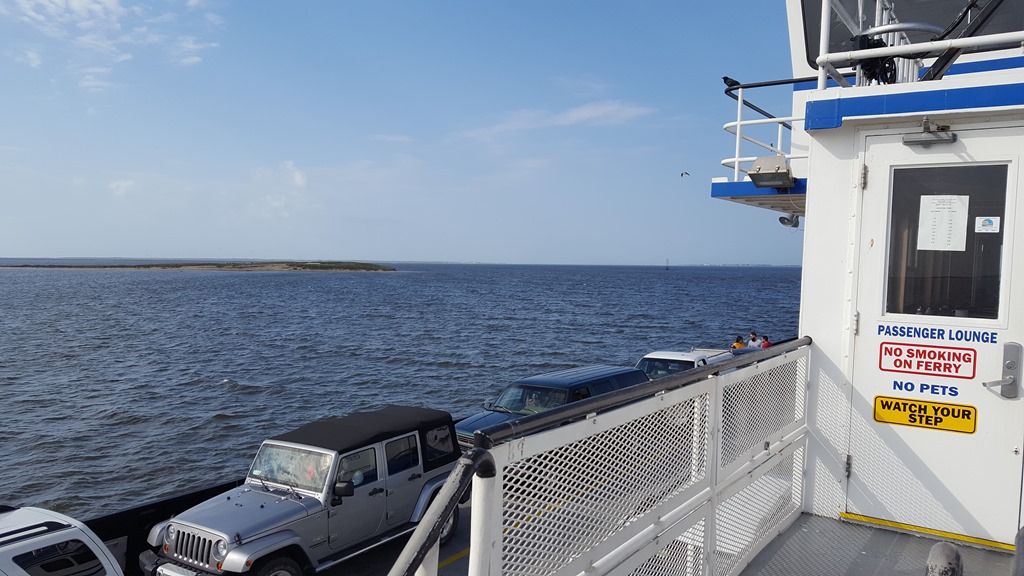 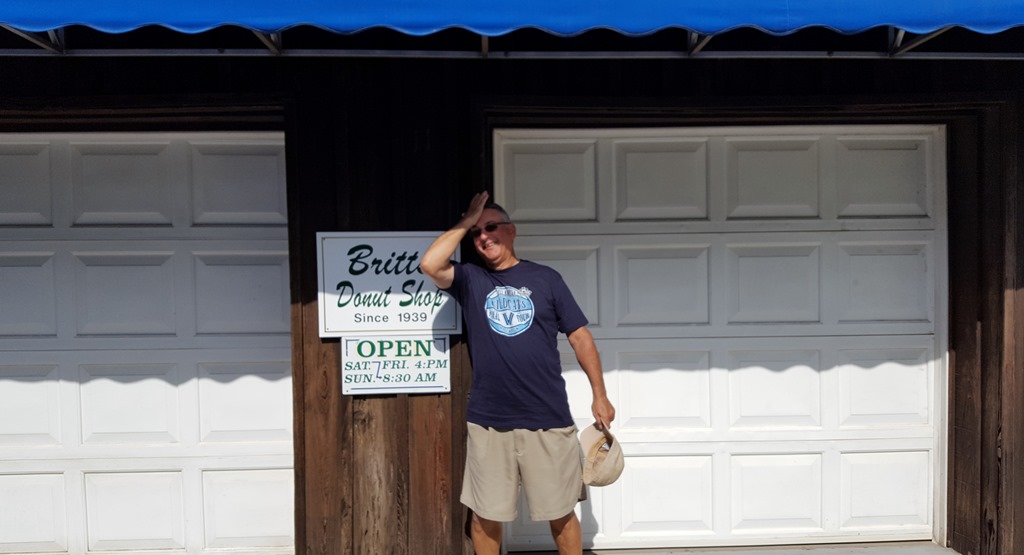 Joe had come up with a great idea to take car ferry across the Cape Fear River over to Carolina Beach…I will let the picture tell the story…. 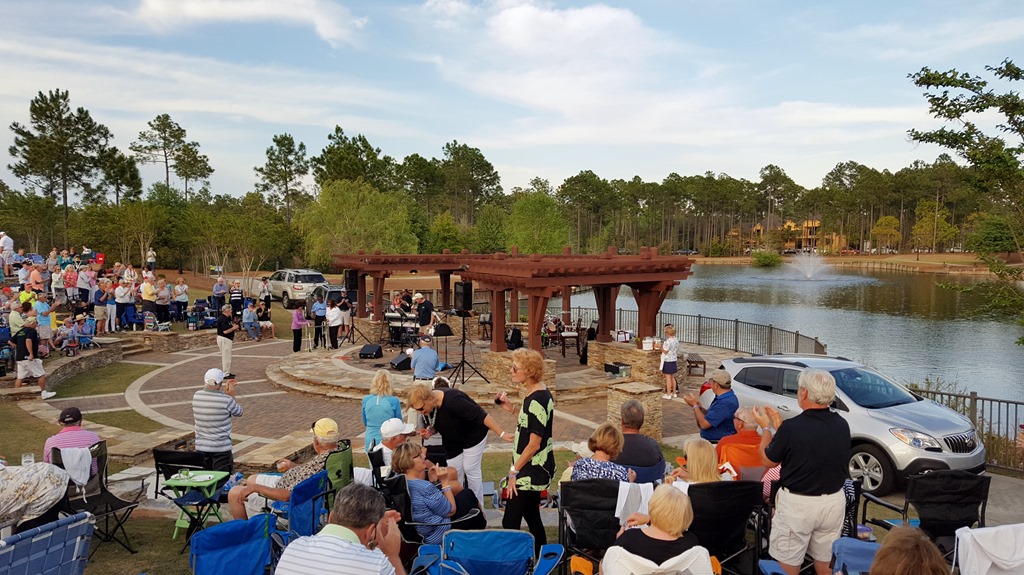 St James Plantation, where Joe & Christine live really rolled out the red carpet where we shared and an evening of live music under the stars!

A terrific evening as Jack enjoys some Terry’s Barbeque! 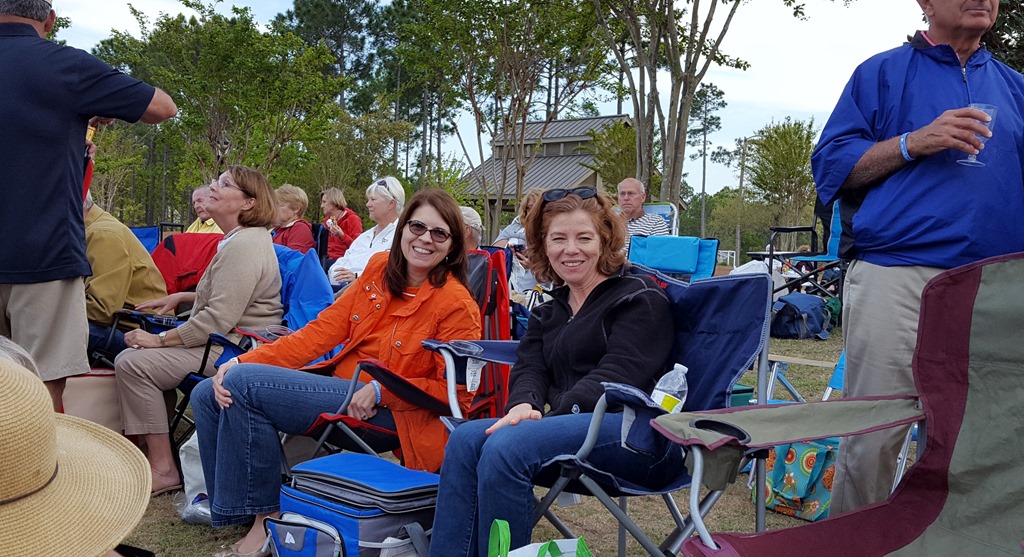 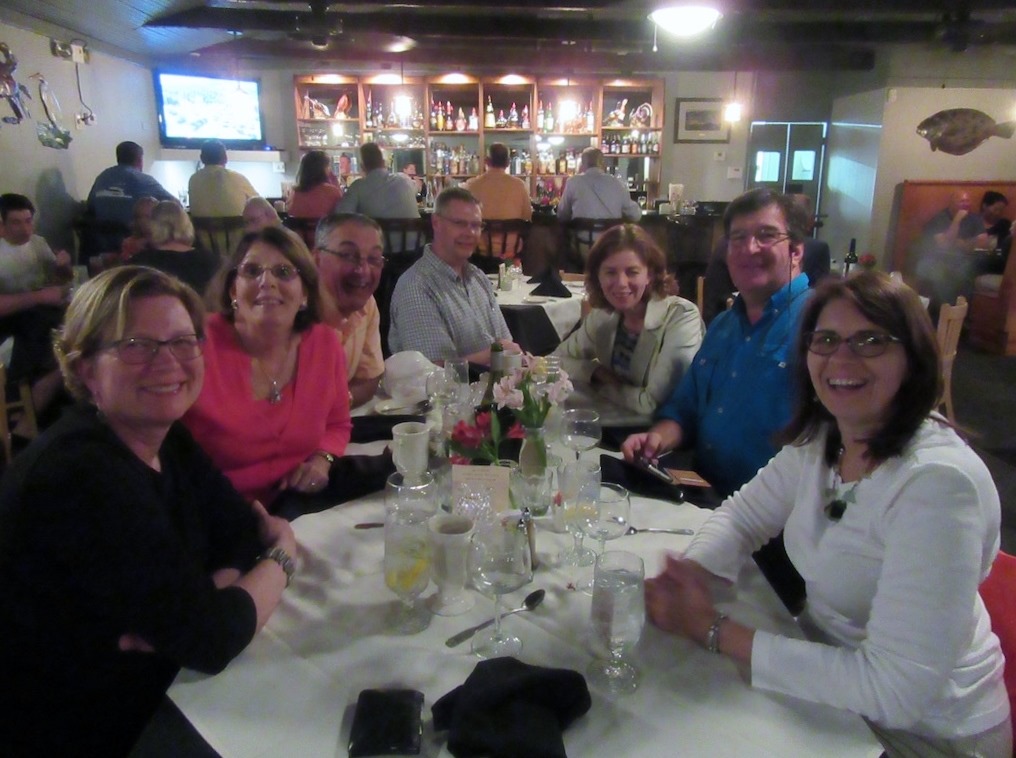 The get together of the week end….these time go by just so very very fast! (Photo Cheryl Duvall) 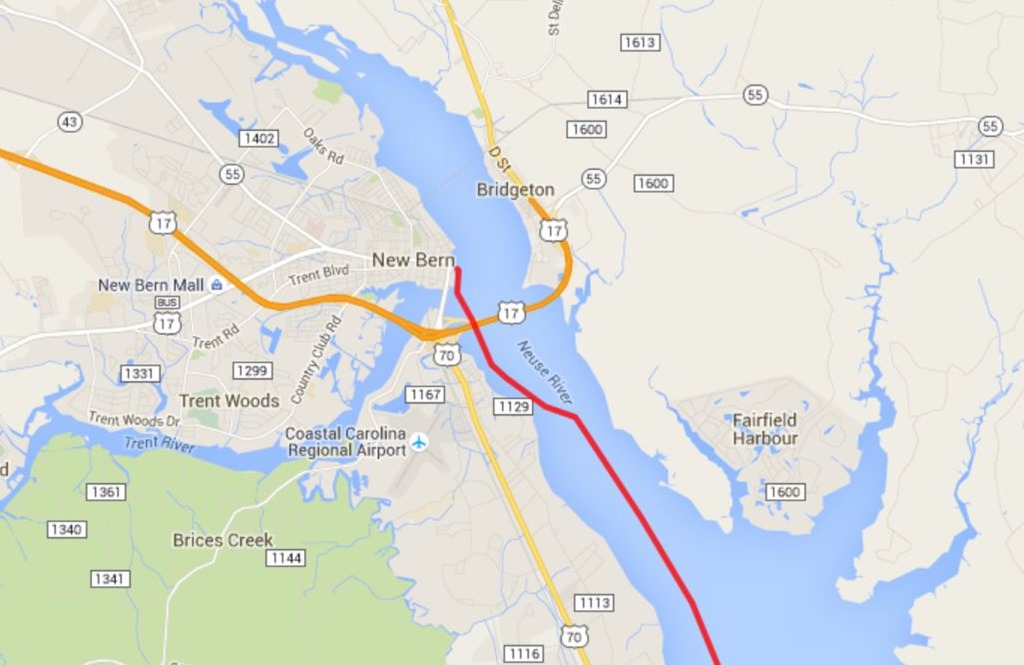 Our final stop of the week is New Bern, NC It is the ancestral home of which product? 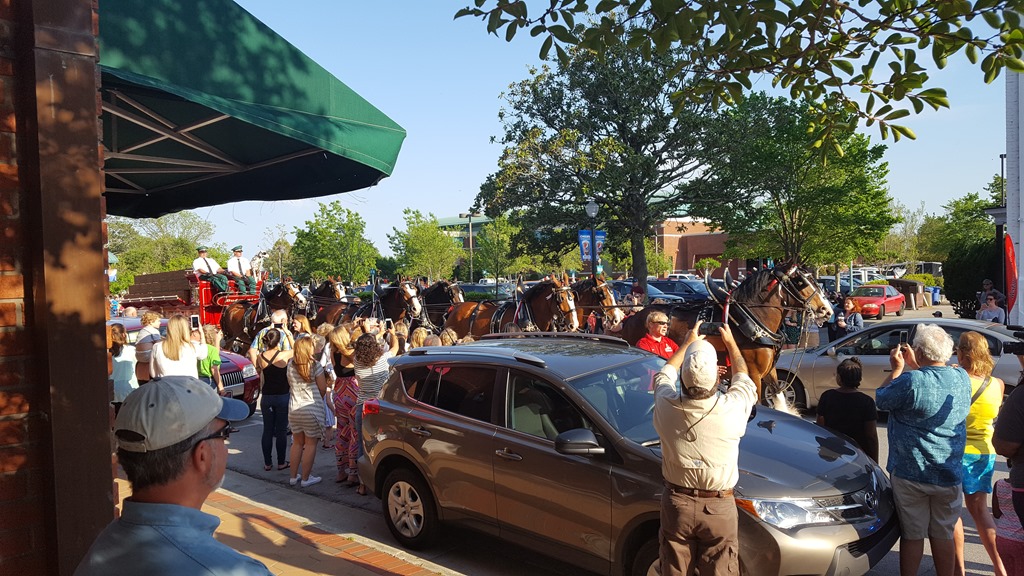 No Budweiser is NOT the correct answer. Just happens that the Clydesdales were in town we suspect for the Cherry Point Air Show occurring this weekend.

It certainly brought we think everyone in town and perhaps the surrounding 100 miles into to town for the show…we were sure glad we were not driving that is for sure. 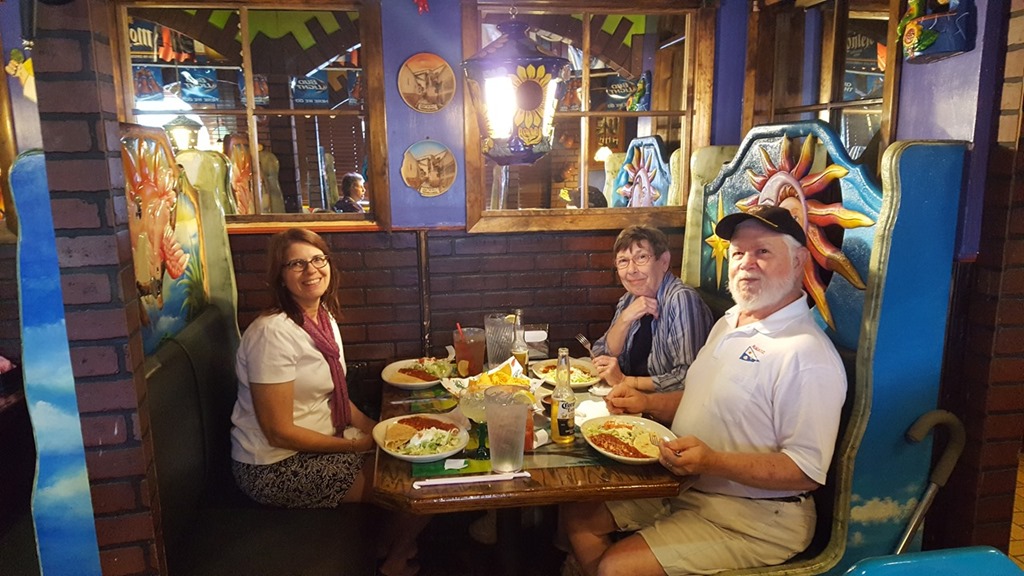 The real reason we came to town was to take Dick & Judy to lunch…yup that’s the truth. Annette and I are both licensed amateur radio operators or HAMS as most know the term.  We count on the radio and those on the other end of the radio to provide information such as weather, sea conditions, basic communications and in an emergency, getting us the help we need. Dick and Judy are those people. We have spoken to them for the last 2 years all up and down the coast and from the Bahamas. They have helped with information on weather, bridge closures and even arranged for a mooring ball in St Augustine. If we were ever to get in trouble, Dick and Judy are the people we count on. We can not express to you enough how much we appreciate you! 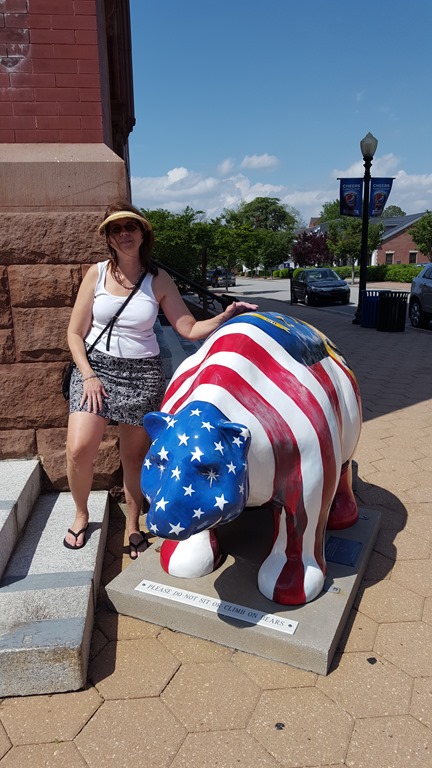 Annette wanted to bring him home…… 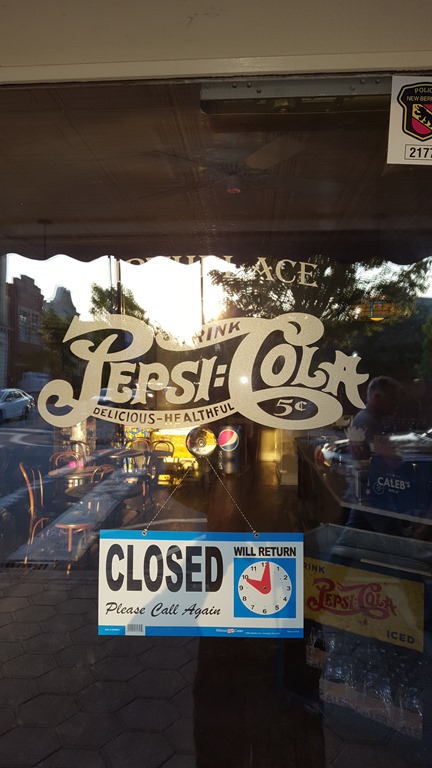 As far as the national product…yes, New Bern is the home of Pepsi Cola!

Okay, this article will have nothing to do with actually being on the move, it will simply try and catch up on the happenings since we have been standing still!!! 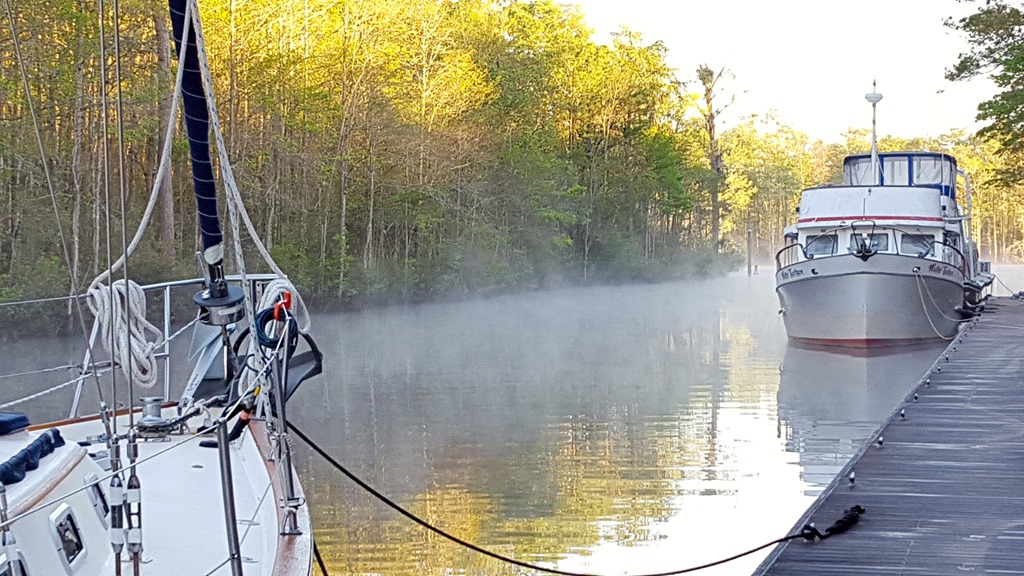 First and foremost we have enjoyed just being still and looking around us. The scenic beauty and the kind and friendly people have really made Osprey Marina a terrific stop. We nromally kept busy on boat chores mid week and took advantage of special weekend rates for rental cars. Every weekend I was picked up by a different driver. Most are retired gentlemen who moved to Myrtle Beach and wanted a part time job. I have enjoyed hearing each every story how they got here. The latest was the author of “The Boogeyman of Baltimore”, John F Riddick. Mr Riddick was a Baltimore Homicide Detective. I have not read YET but will report out 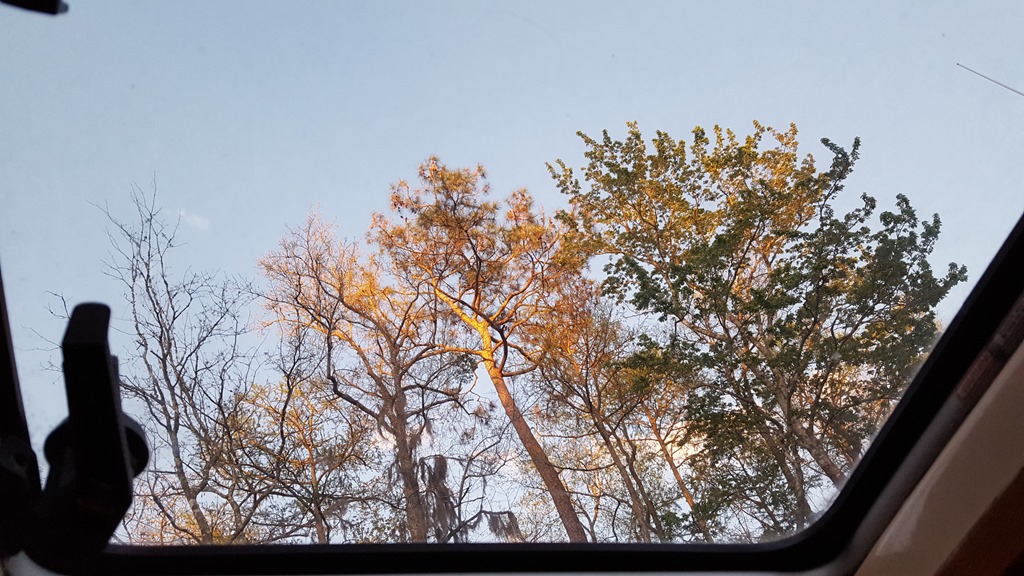 Nothing particularly striking from the above picture, just my view one afternoon from the “Man Cave.” Life is not so bad… 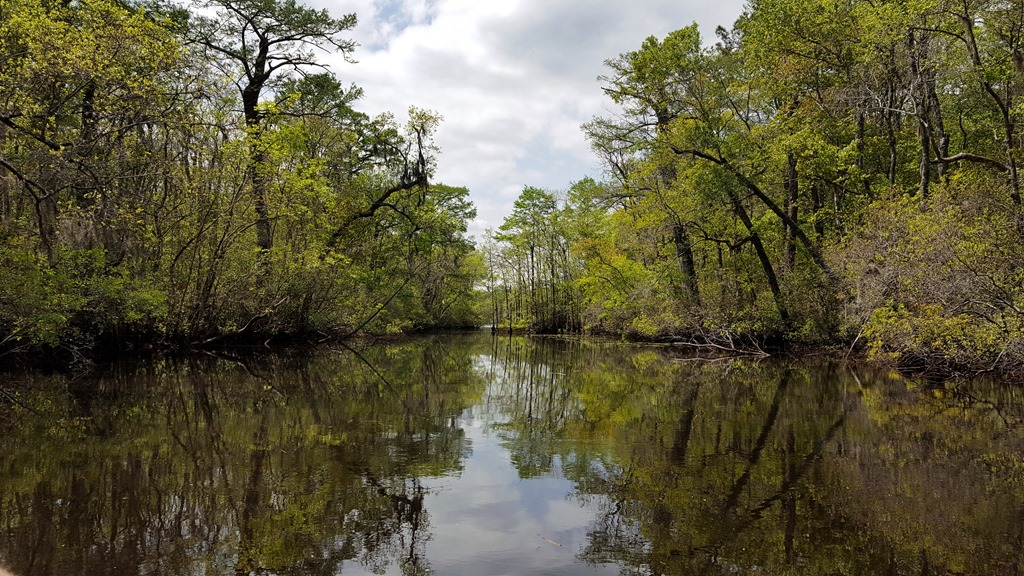 The section of the marina where we were moored is a bit out of the way so there was a golf cart available to run back and forth. 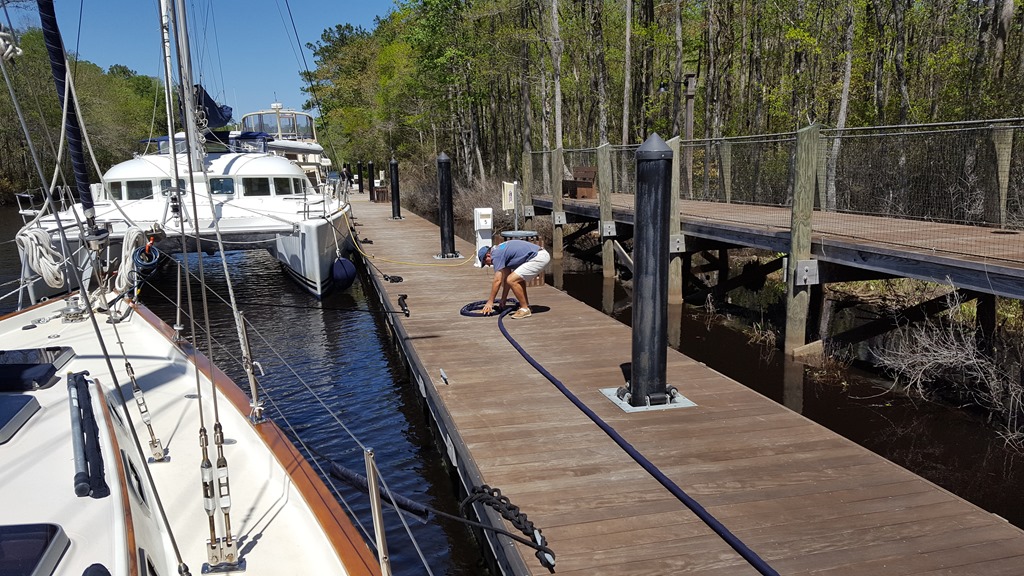 The best part, okay in my opinion was all the projects we got knocked out. Annette was tied to the sewing machine for 3 days taking care of a myriad of little jobs but the big one was shore power cable covers. We purchased a new set which use the newer Smart Connector. I will be writing next month about this new connection type. 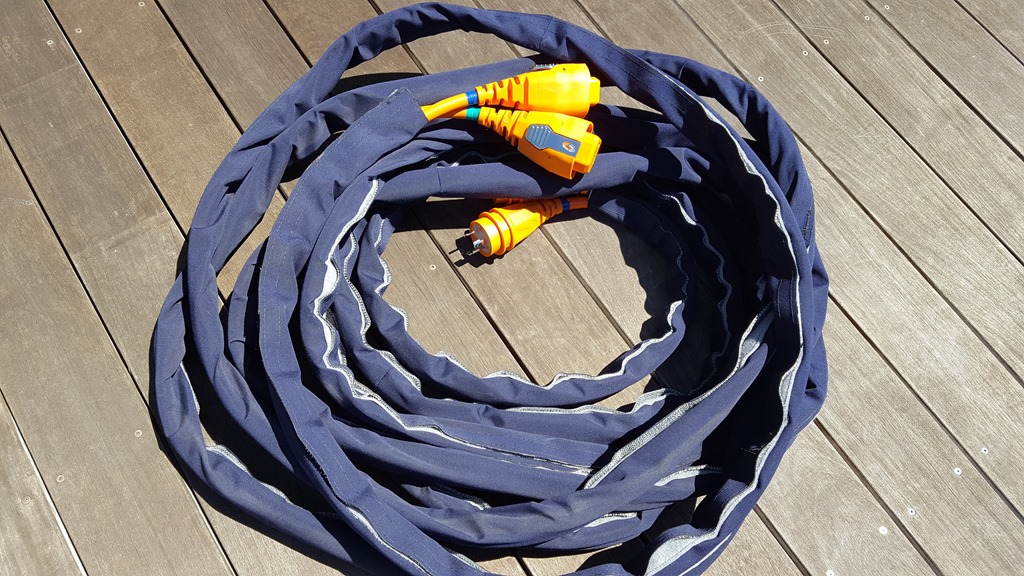 We really did complete all of our stand-down maintenance with the exception of a couple if contractor required activities as well has a teak varnish and deck wax. Both of which I will get done in Maryland.

Another great thing about being stationary is that we had a number of sailing friends pass through this popular marina. Yes that’s ice cream…we are a wild gang! 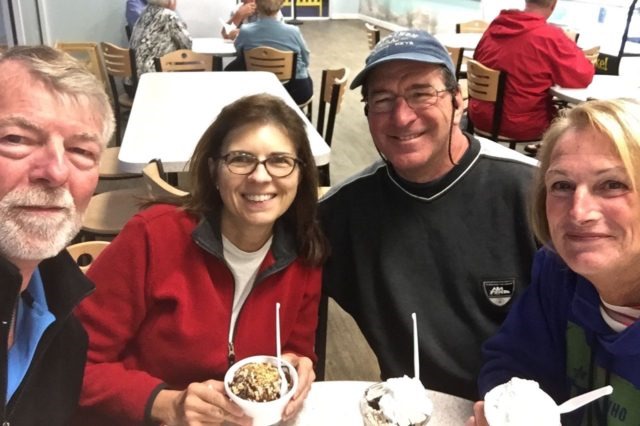 Kindred Spirit came through and well maybe there is a trend here…. 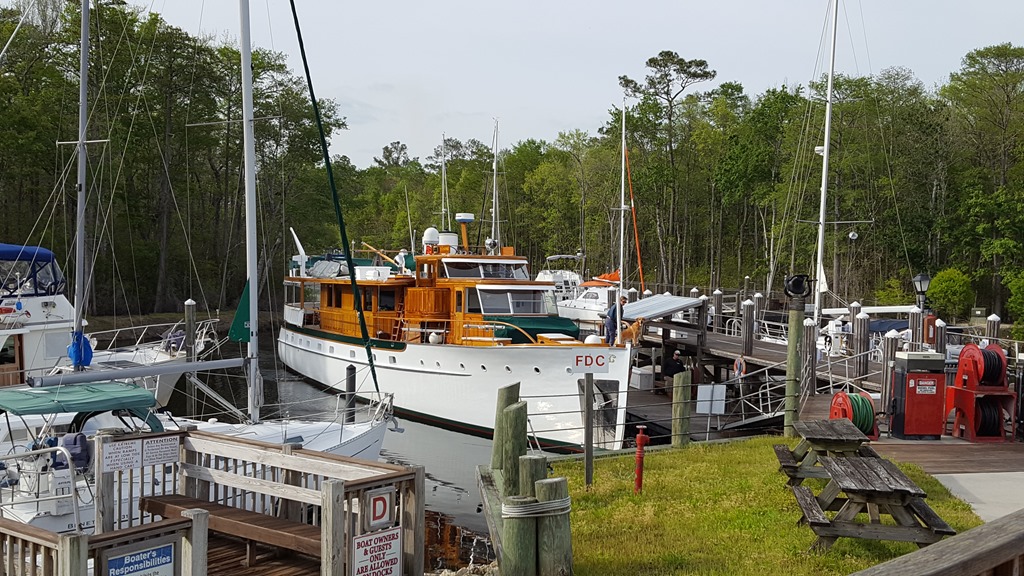 This is the view from our Happy Hour Porch. It was always fun to see which boat was going to come in next. The Trumpy above is owned by Greta Van Susteren. She of course was not board but a very handsome vessel none the less. 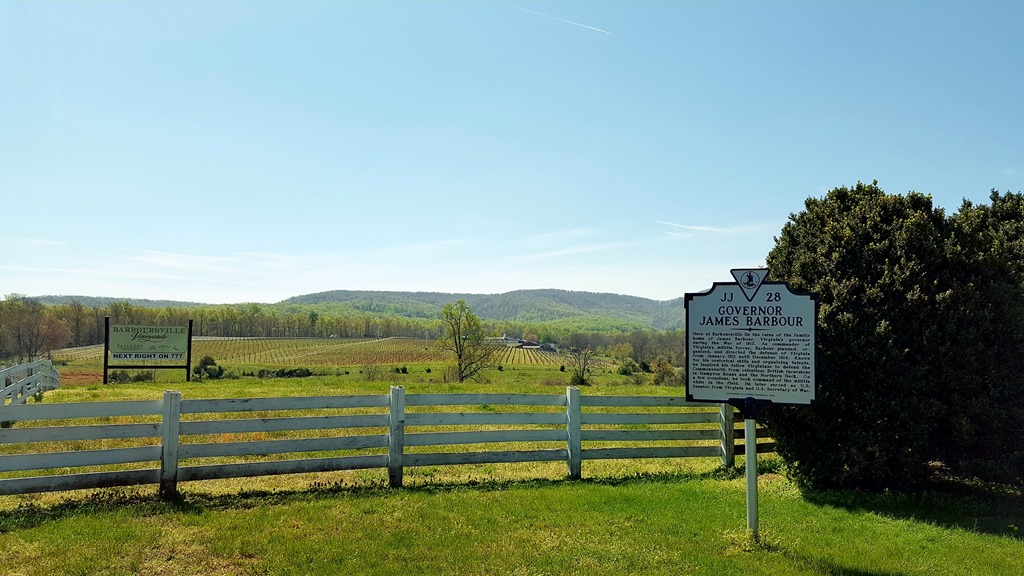 Our whole spring plan was based making sure we were at Annette’s nephew Byron and Alex’s wedding in Virginia. The location “forced” us to go right past our favorite Virginia Winery, Barboursville Winery. The winery and countryside is absolutely beautiful. 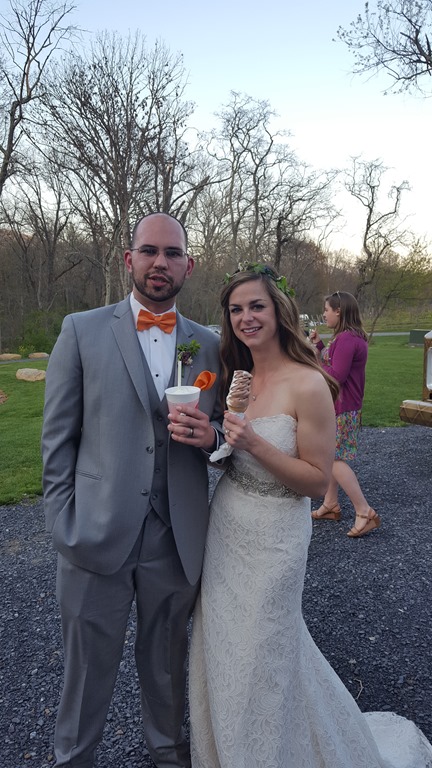 But then it was time to move onto the main event and sharing the special day with with Byron and Alex. 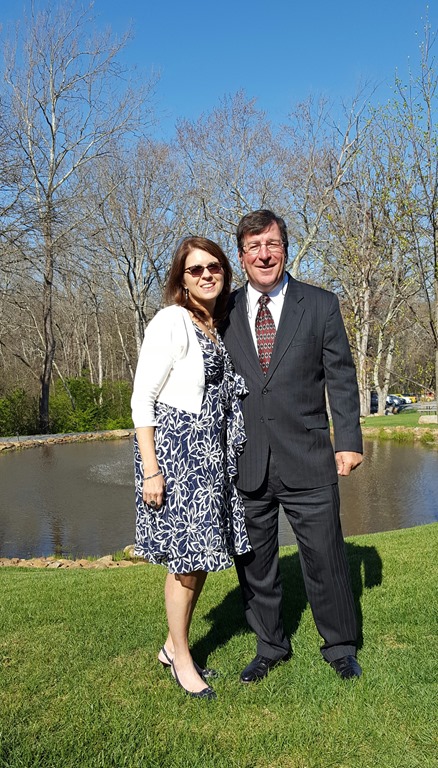 And yes here is a picture of your particular interpret cruisers in our NOT cruiser uniforms. 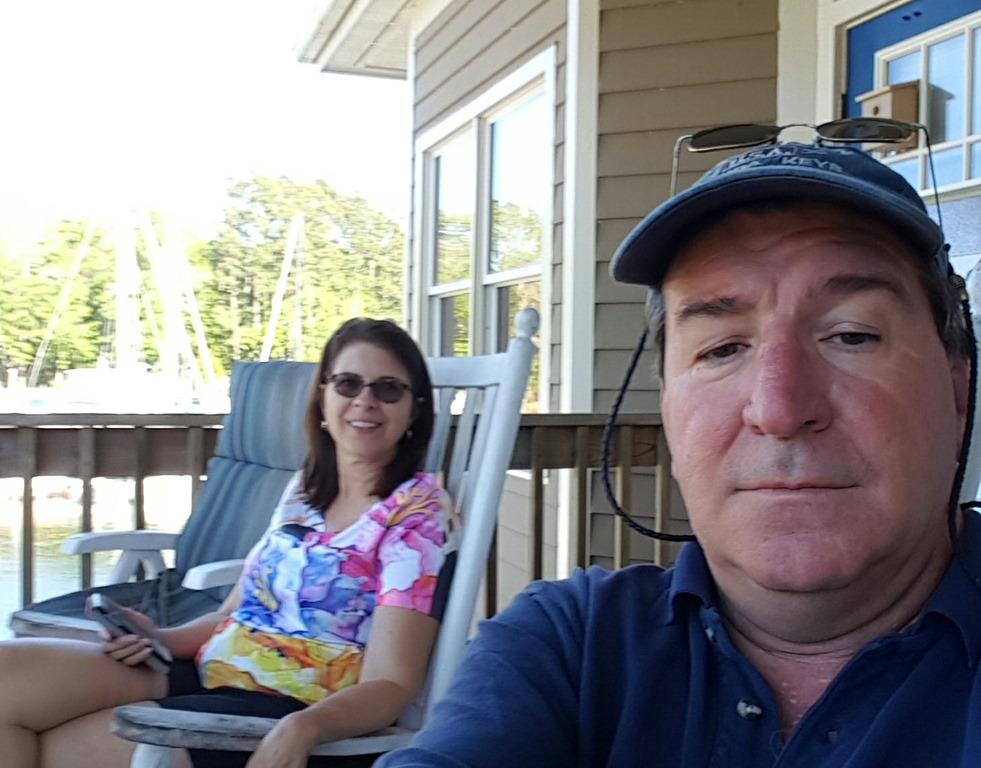 After a terrific weekend away it was great to finish it up with Happy Hour on our now familiar Happy Hour Porch. We will be getting underway in the AM so buckle up, its time to get moving!