Magnolia enjoyed our short stay in Moorehead City with the highlight getting to visit Annette’s cousin. 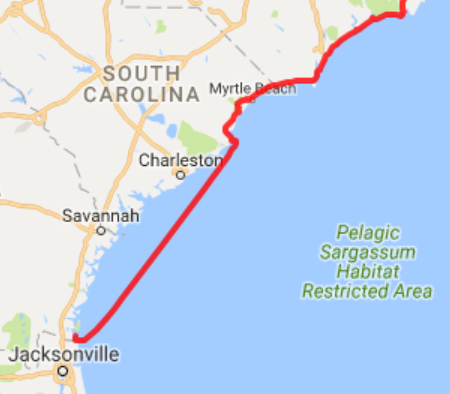 We just happened to depart the morning after the Presidential Election. The moment I started under this bridge I thought it was the perfect metaphor for the morning. I wonder what the future will bring? 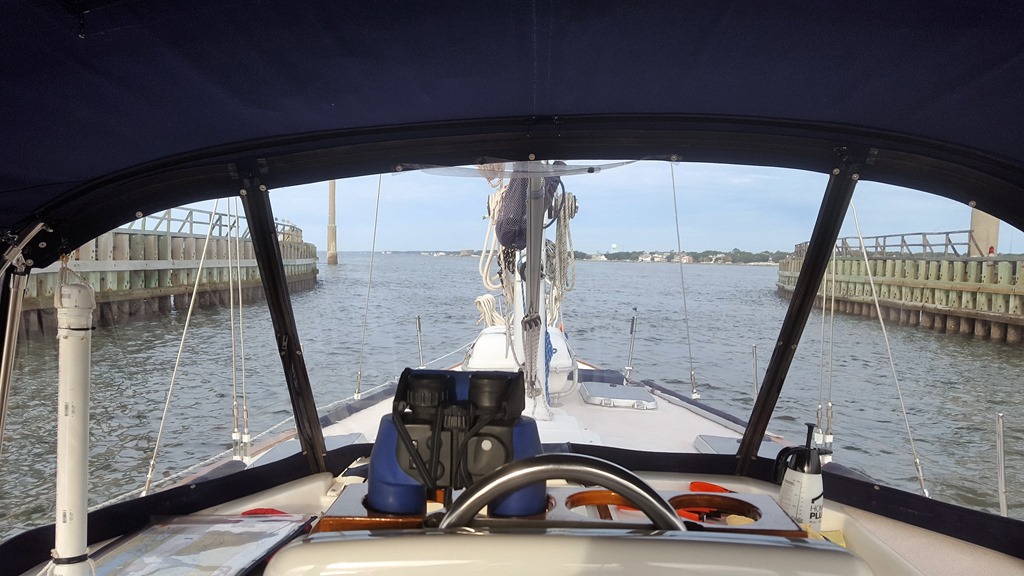 Magnolia had pretty good weather in-shore but off-shore conditions were not suitable for us. This kept us traveling the Inter-Coastal Waterway.

We had prepared ourselves for some long days and the first day out of Moorehead we made it as far as Camp Lejeune, NC. There is a well protected basin just off the ICW. We are not allowed to go ashore on the base but we are welcomed to anchor as we please. 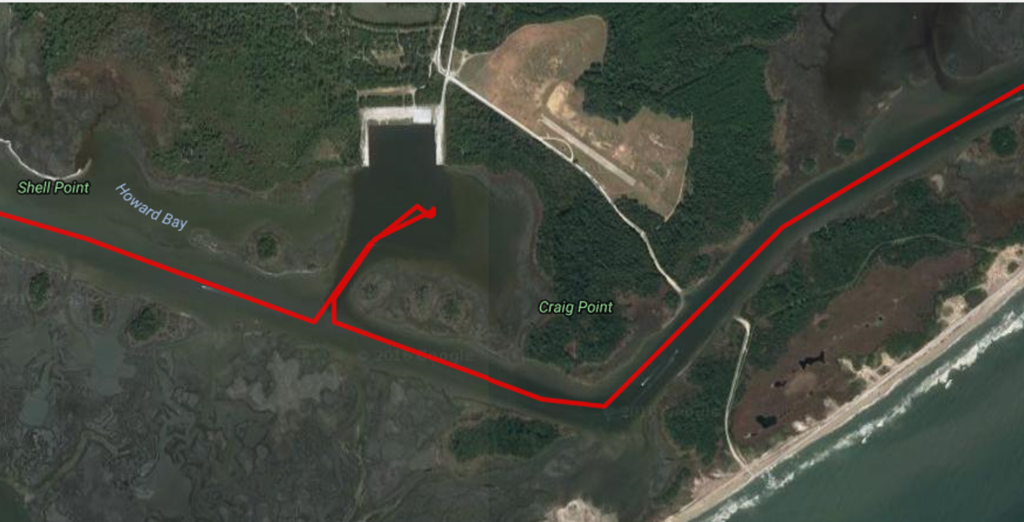 We have seen many different things while anchored here and this time no different. It appeared there was some kind of small boat driver training going on…okay, maybe not that small. 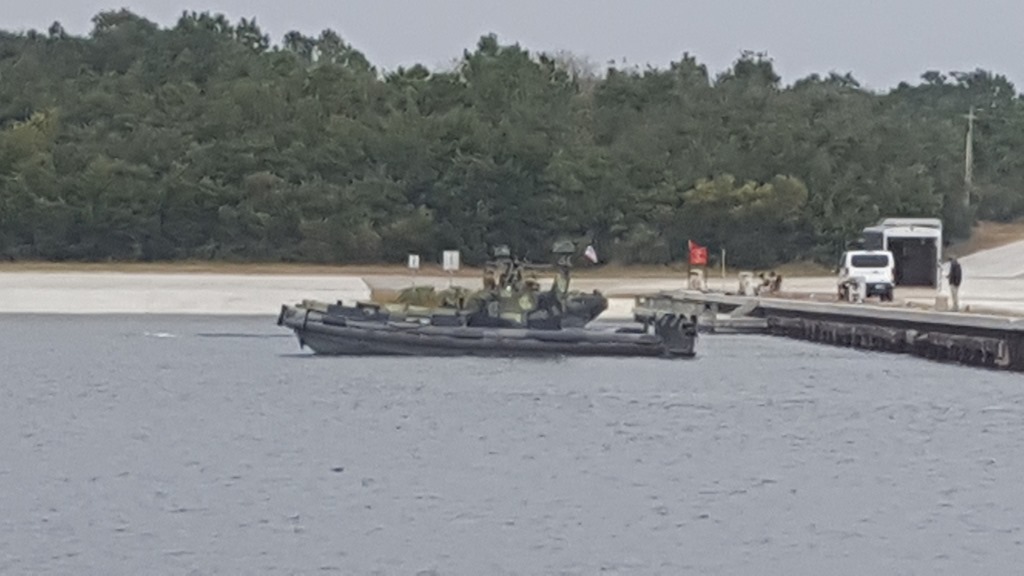 Another long day brought us down the Cape Fear River where there was a HUGE dredge working along the river. The scoop could pick up a whole Volkswagen Beetle! 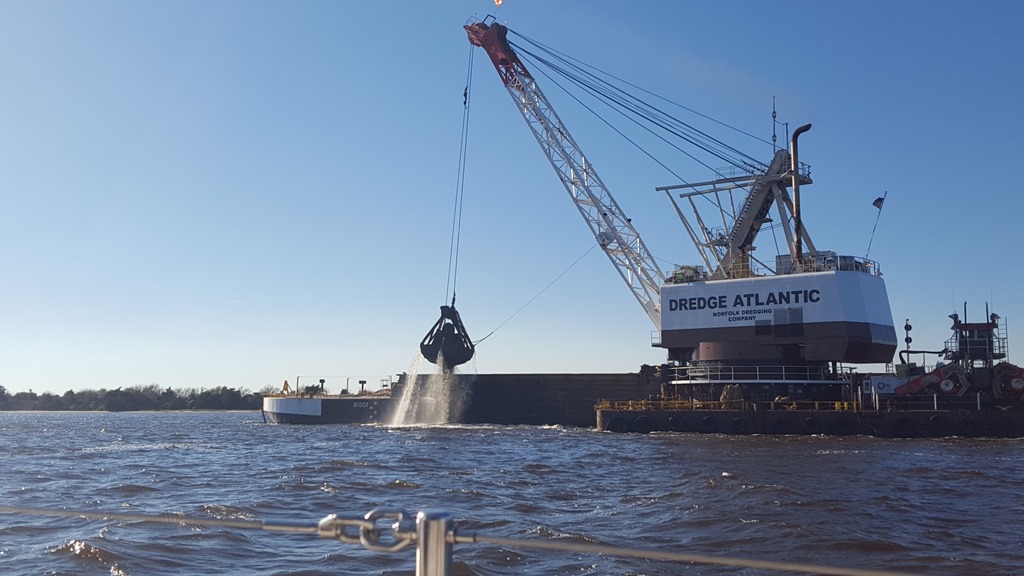 Another long day brought us to Southport NC. Annette is a long time contributor to Hank Pomeranz ICW Status seminars.

We had never anchored in Southport Harbor before but did remember our friends Al & Michele from Kindred Spirit had. A quick message provided a couple of suggestions and we were quickly anchored. While Annette attended Hank’s seminar I needed to run a couple of errands. On the way back, on the way back I noted I could see Magnolia right through the waterfront restaurant. 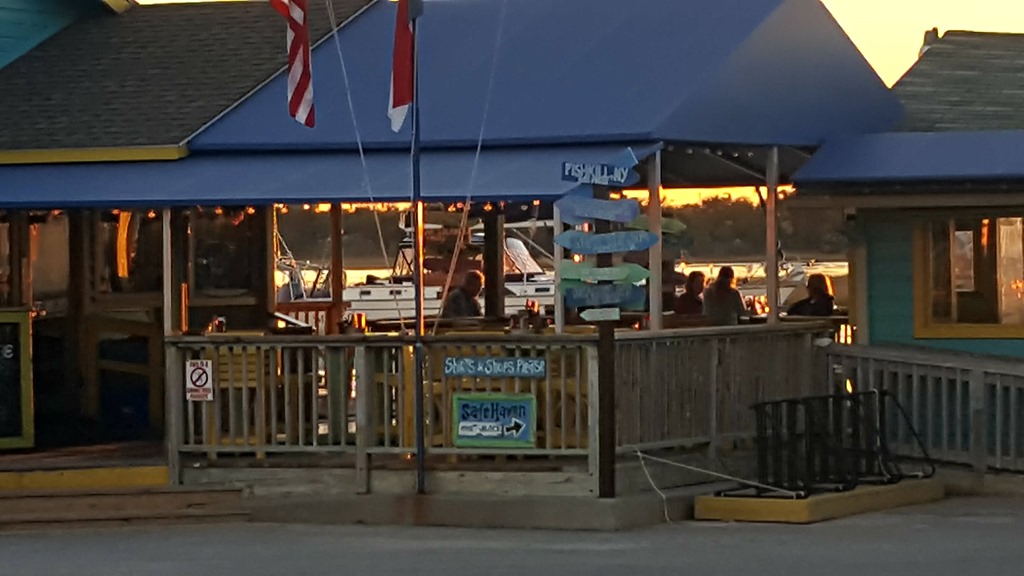 As I headed back to Magnolia the sunset light, the rising moon and calm waters provided one of my favorite pictures of our girl.

Our friends Joe and Christine were out of town during out visit so we just waved as we passed St James Plantation. 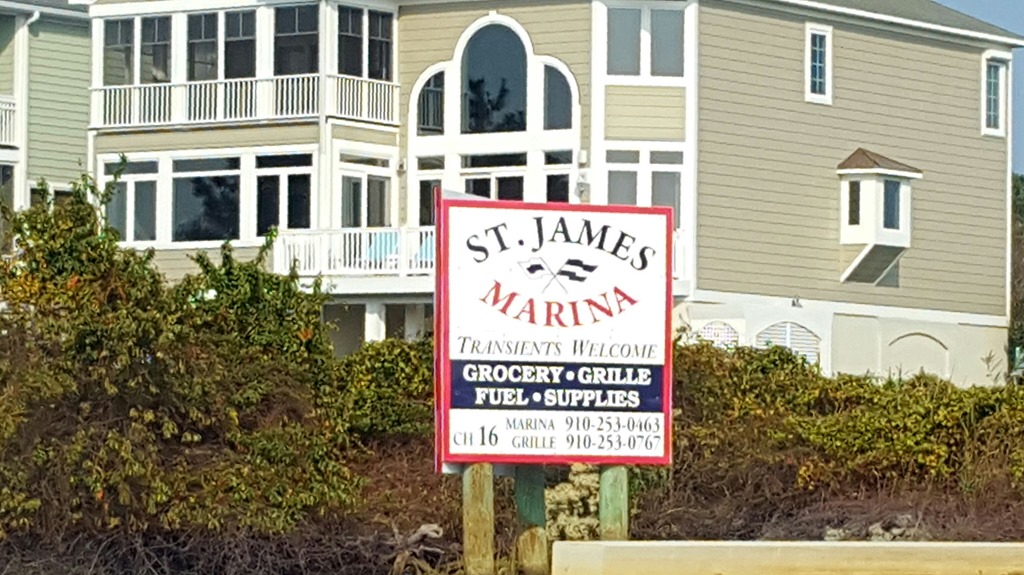 We spent a couple weeks at Osprey Marina in the spring and looked forward to our brief return AND their great price on diesel fuel!!! Departing on a cold wet morning only further motivated us to get this girl moving. 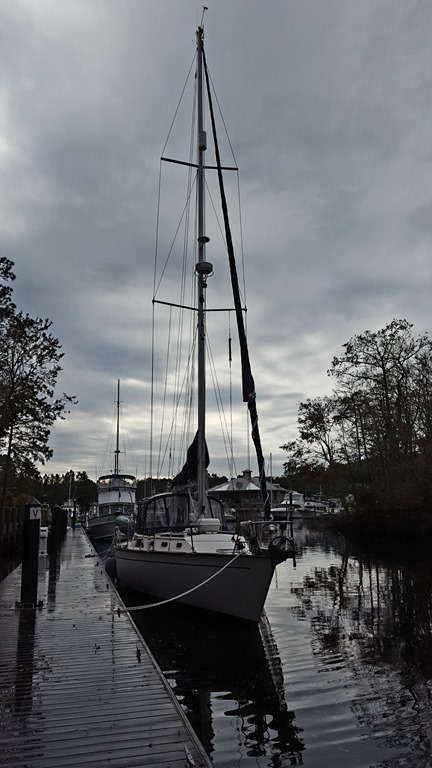 We anchored in Winyah Bay about 50 miles north of Charleston and prepared Magnolia to go off-shore early the next morning. We always do some cooking so that we can have hot meals offshore. We also rig lines and tethers to secure ourselves while we are working on deck at sea. We also test and take an extra look around at all the gear might need while offshore. Things are never perfect but to minimize risk, we want things to be as good as we can make them!!! 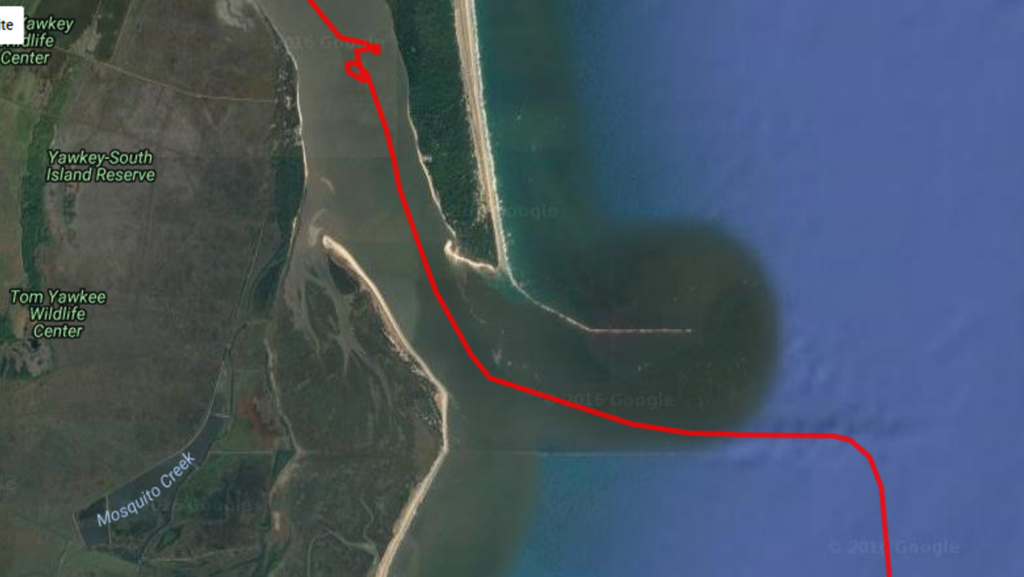 Of course when we got up early the next morning it was dark AND foggy. We decided to drag our feet a little till atleast the sun came up and shortly the fog was lifting too. We fired up the radar were off. By the way, Winyah Bay is also set up so the marks appear as AIS objects which is also helpful for navigating in low visibility conditions. 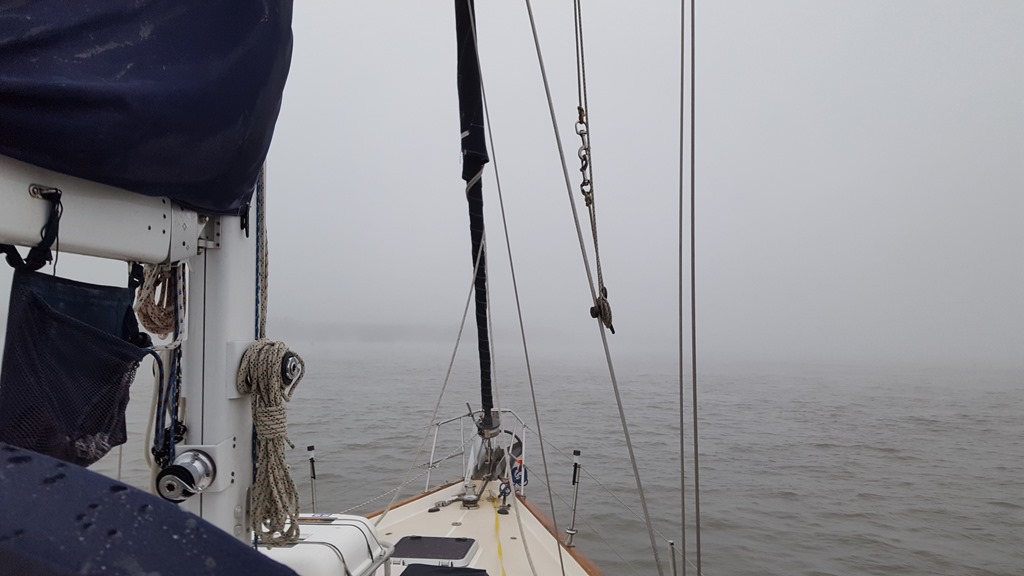 We happened to be offshore the day AFTER the most SUPER of the super-moons but ours was not too bad. I had never experienced being underway and having a moon so bright that for the first couple hours after coming it was like having a truck following us with its headlight shinging behind me. It was REALLY bright. 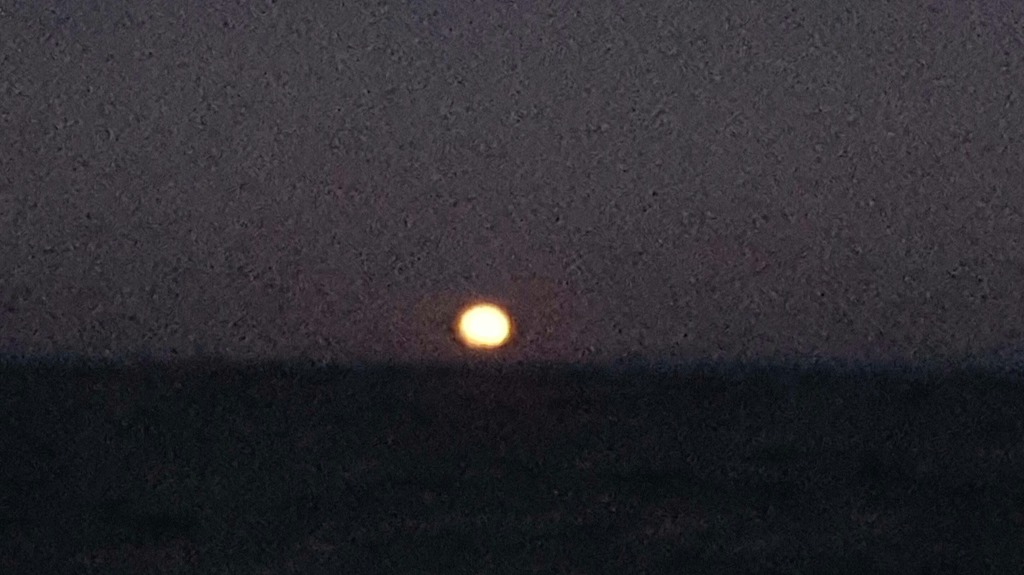 The 33 hour 200 mile offshore leg was pretty good except for a surprisingly strong chop from the SW that added a good coating of salt to Magnolia! 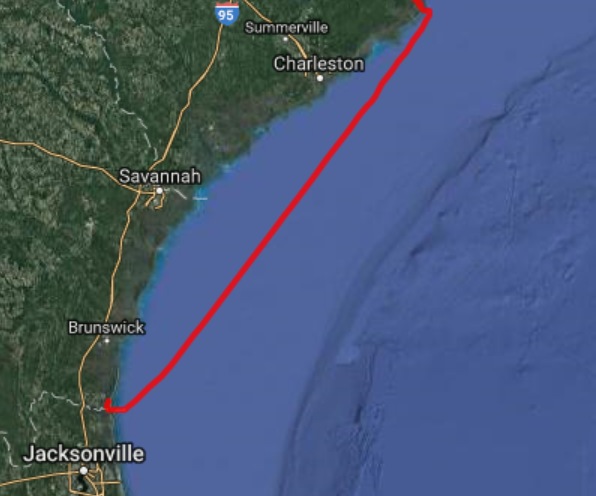 We arrived the St Mary’s River which is the dividing line between Georgia and Florida and made our way up river about 10 miles to Cumberland National Park.

Cumberland Island Ferry – Currently the only way to visit but more about that in the next post….