The oncoming Easter Holiday signals the beginning of the cruiser migration north and west. When you only have a week left you make the most of it. The week started with a couple mile walk out into the country and not in, but near the middle of no-where! I must confess we made two trips to “Papa Nastys BBQ.” (Hope Town Abacos) This was not the best pulled pork barbeque in the Bahamas, it was I think the best pulled pork I have tasted ANYWHERE! I have tried a fair number of places all over the south and darn this was really good! 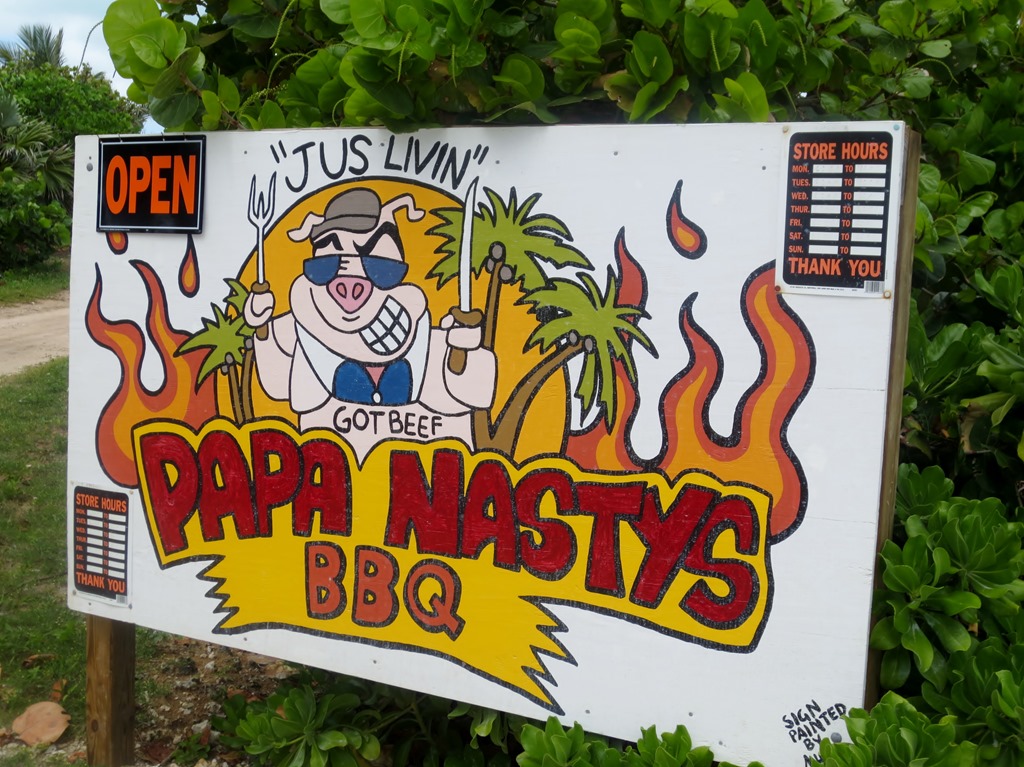 Like I said, we descended on the place and yes that is it. A trailer with a frame around it. Mr. Nasty is center in the orange shirt, nice guy! 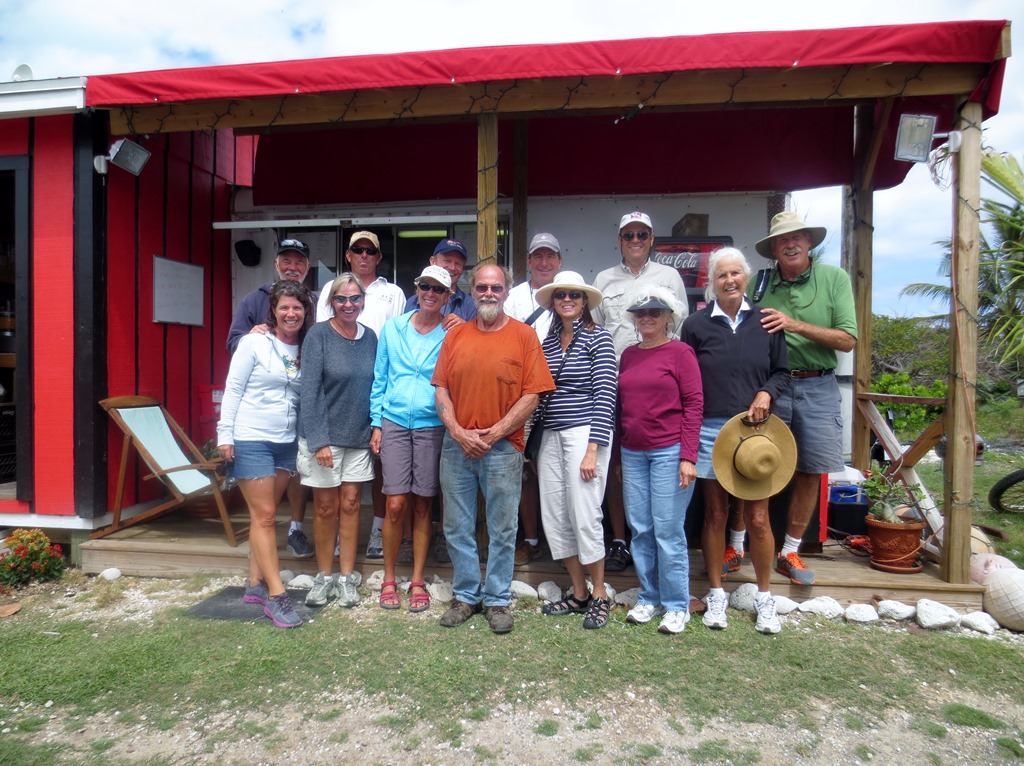 Our next mission was to join the Sip Sip Sot organization of Hope Town. Yes, of course it is a real organization, there are membership cards!

As you can read below there is a great humor associated with the organization, but from the little exposure we have had, they are more serious about the charity than might first be apparent. I think they try to down play the charity all the while catching a pretty fair share in the collection tray!

In case you have no idea why you joined this illustrious yet somewhat dubious organization, then you are definitely Sip, Sip, Sot material, and you have found a home. If you are sober enough to read this newsletter, then now is the time for us to enlighten you about the organization’s history, origins, purpose, and goals.

In June of 2009, four friends got together for a few sips of their beverage of choice. While enjoying their drinks and the glow of companionship they had an idea. Why not found a group that had as its purpose nothing but chatting with friends over a flagon (or wine glass, or tumbler)? A group without rules, directories, by-laws, meetings, committees, or fundraisers. Our only goal would be to gather like minded souls for the camaraderie.

Because the four friends were besotted with the idea and were sitting at the Wine Down Sip Sip, they decided that the name of this august group of friends should be the Sip Sip Sots. This was not meant as a denigrating appellation but as a lilting bit of fanciful sibilance with just a touch of alliteration.

After a few more sips we had another idea. Perhaps some of the local island establishments that sell spirits might want to solicit the good will of such a jolly group of friends. If that were the case, then the proprietors of these businesses might make it worth our while to have our gatherings with them. We mused,“might they add some time to their Happy Hour prices for us?” “Might they provide us some goodies to be nibbled whilst we sip?” Well, after some investigation, we found that The Abaco Inn, Sea Spray, and The Lodge were willing to entertain such an idea if enough of our members were in attendance. The Wine down Sip Sip also was willing to offer their establishment as a headquarters!

Our last job then, was to gather around us friends with like minds. When you joined, we asked that a fee of $5.00 be given to the founding members. This is for all their efforts, and to defray the cost of membership cards, newsletters, and rosters, and the major portion goes to Friends of Abaco Animals, a charity that provides for abandon, homeless and needy animals. This is a one time assessment for a lifetime membership (your card expires when you do). 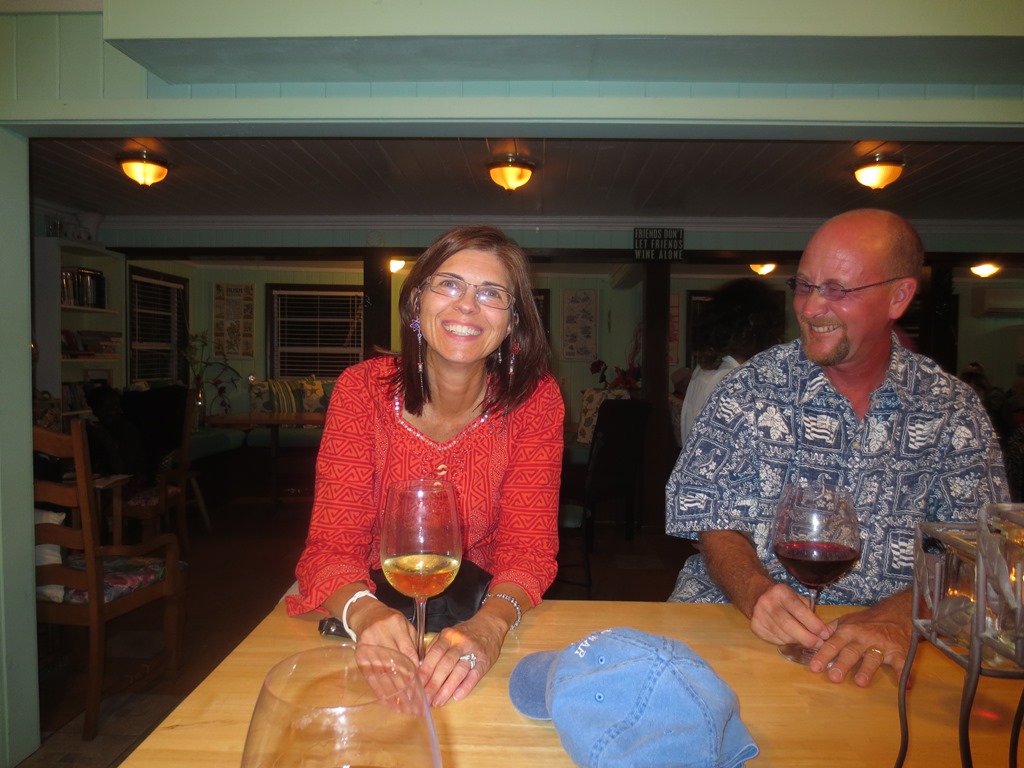 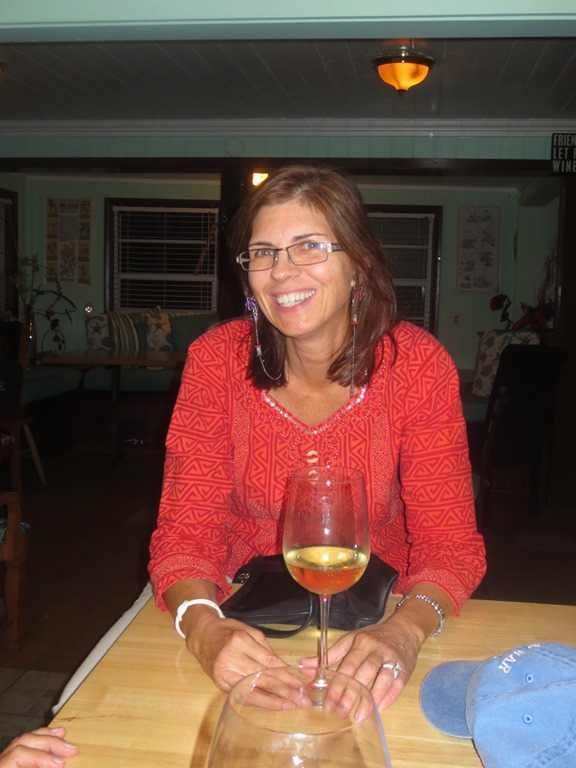 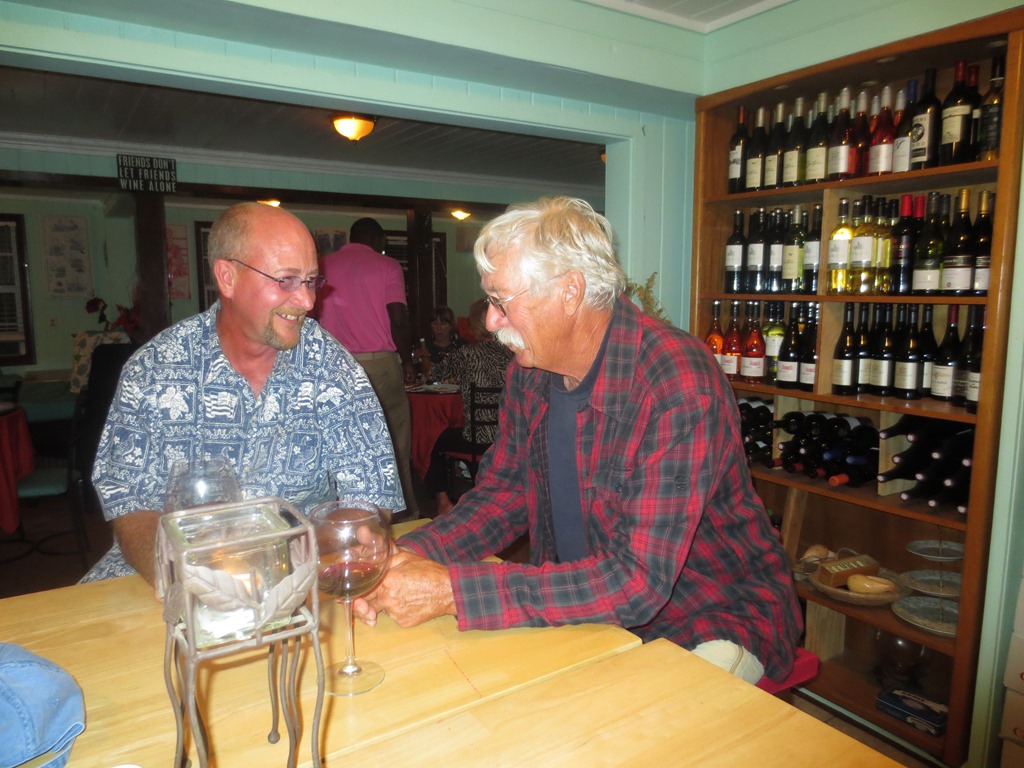 As we were the last to depart from the weekly membership meeting, keep in mind we left at 8:30 PM, it was a successful evening! No the week was not over yet! (You are right, we really need to get on the road.) The next day was a full moon so there is the monthly dinghy raft up and drift. How this works is everyone brings a drink and a snack to share and the dinghys are lashed together. As the tide heads out the whole raft floats across the harbor till sunset. 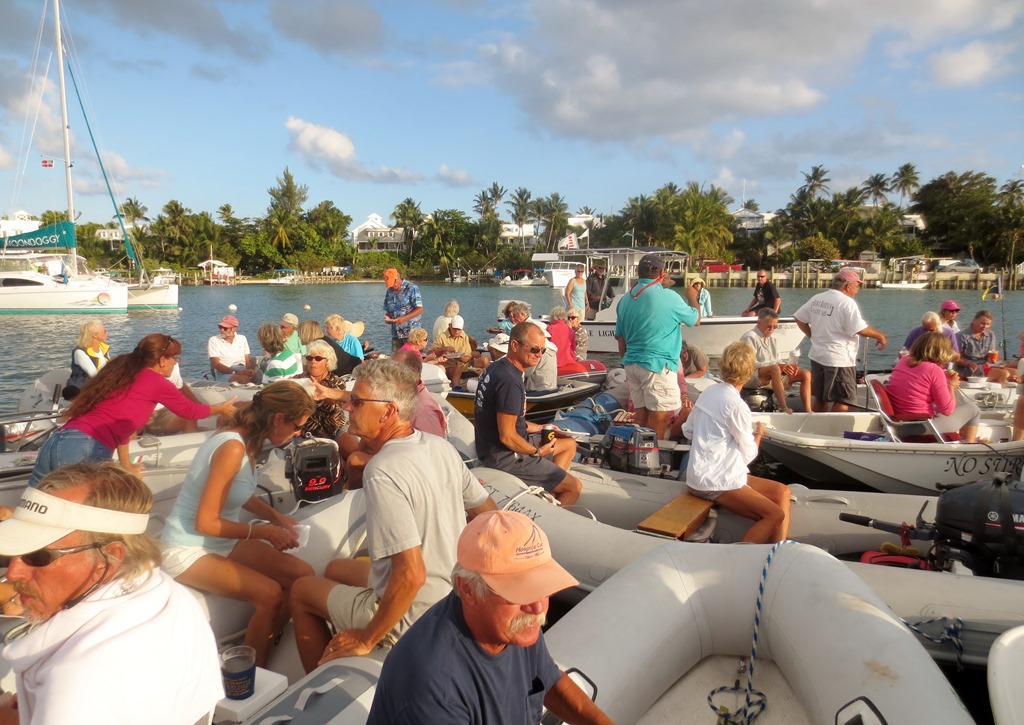 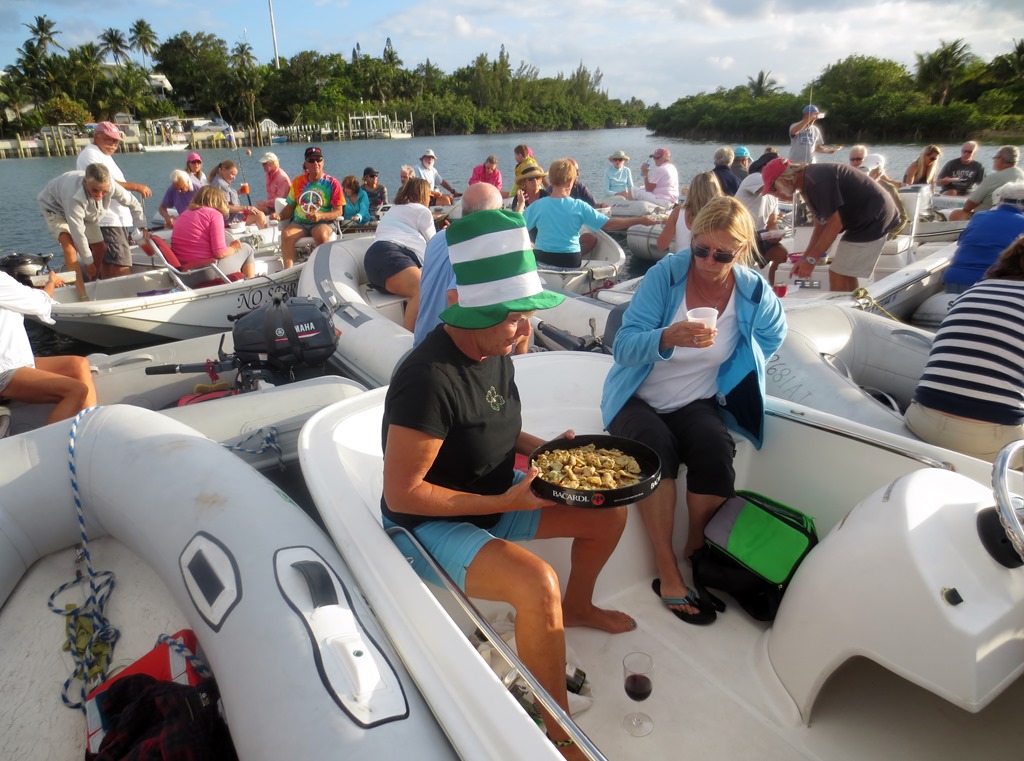 Dick did not seem to enjoy the last round of snackage! 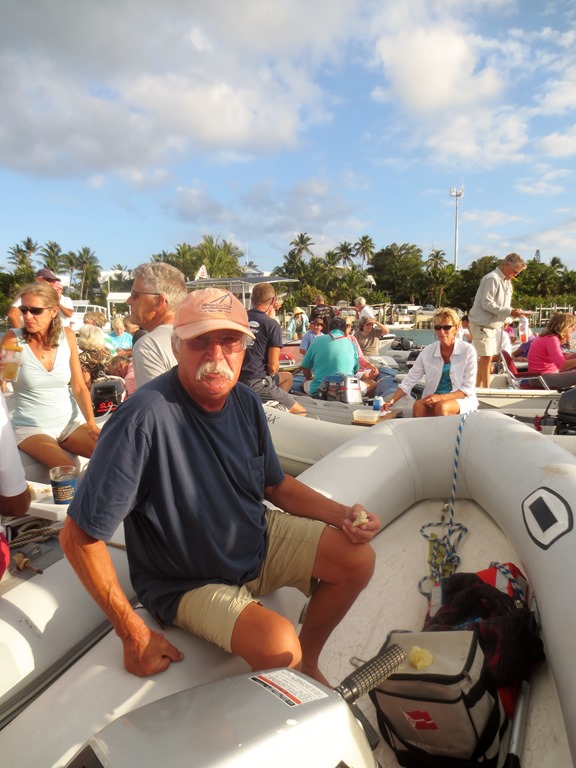 Our new friends from Cutting Class (Dan & Marcia) via our friends on Kindred Spirit, see how this works? 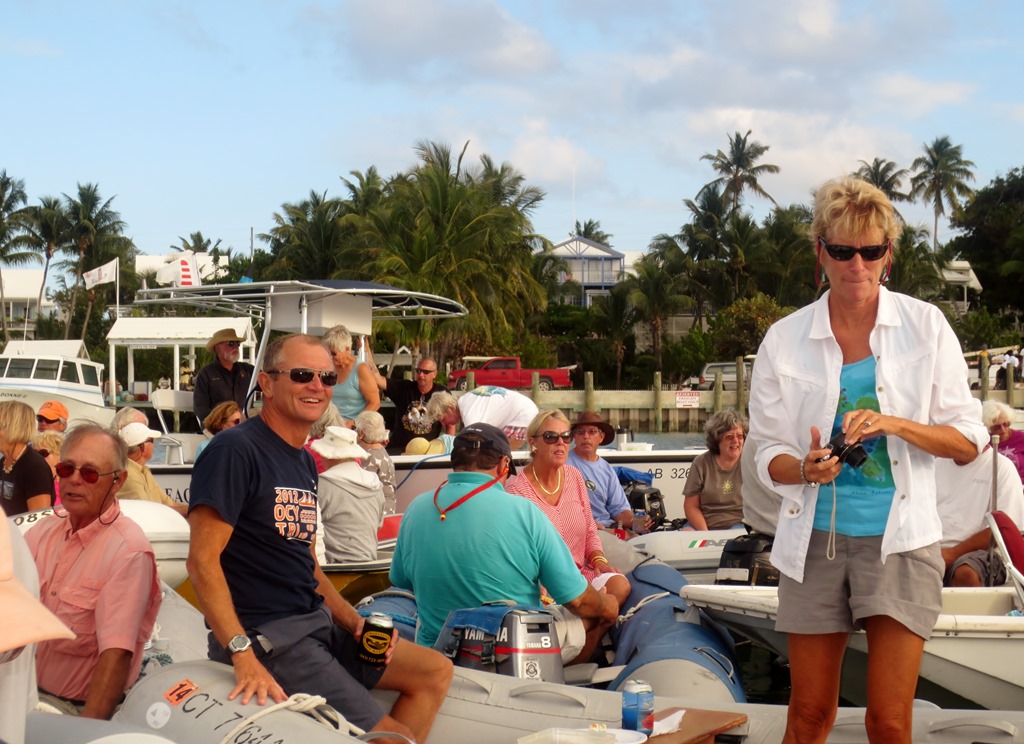 Anything look familiar? Yup that’s Magnolia in the background as we drifted past. 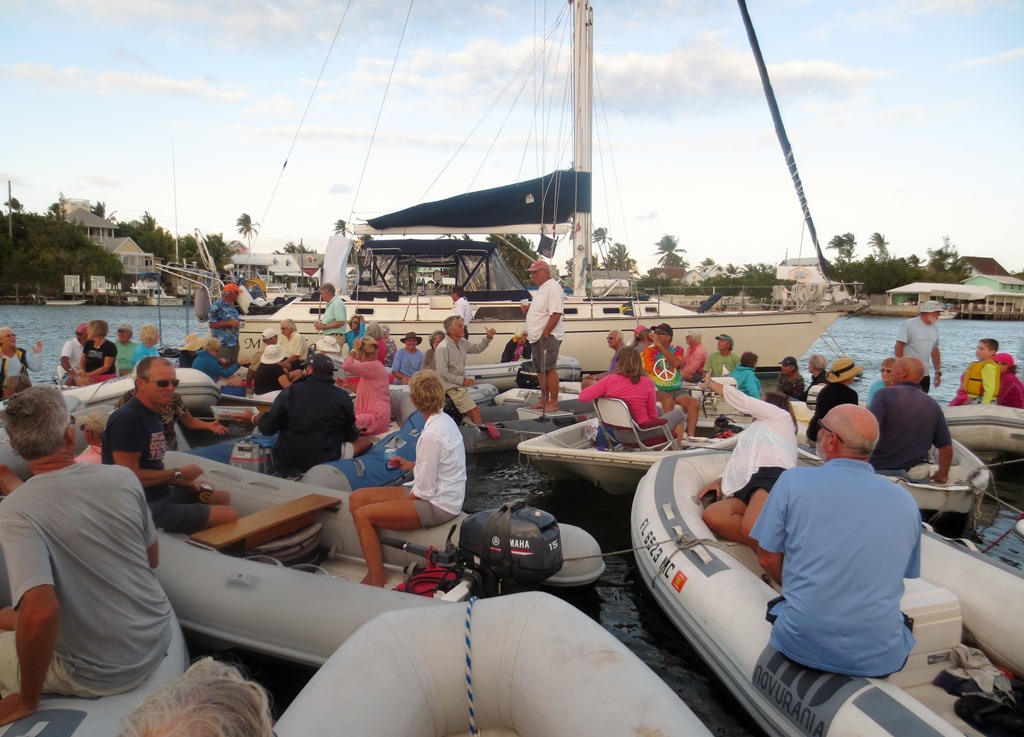 Our friends Frank & Mary Marie returned “home” from a trip to New Jersey so a quiet evening back at Sip Sip was in order. 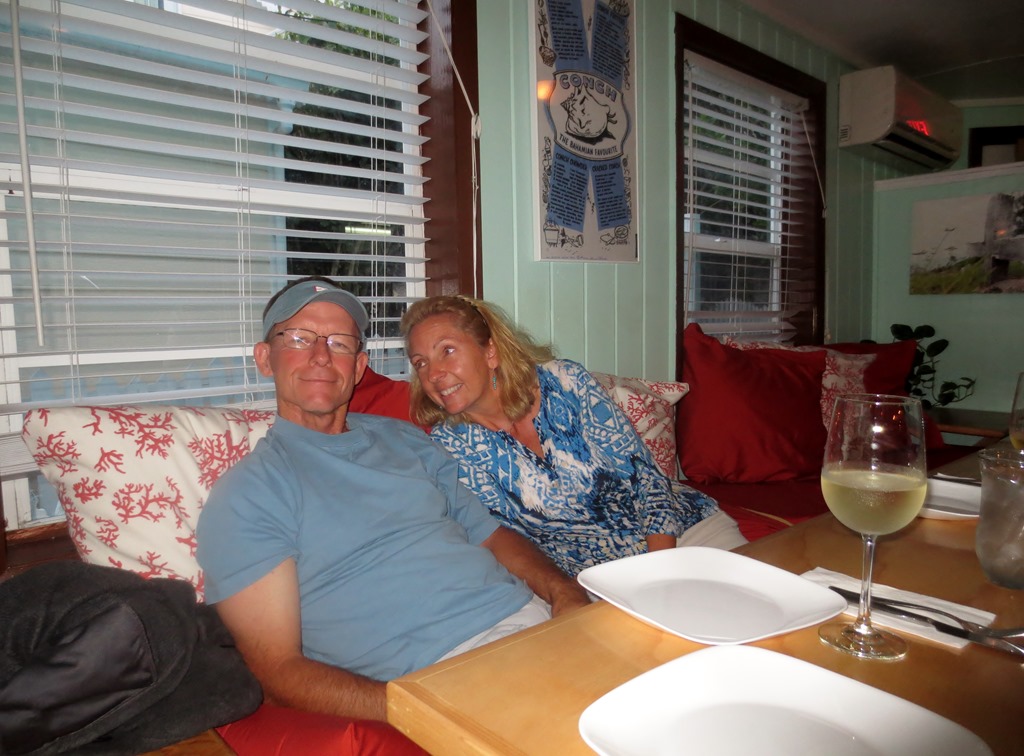 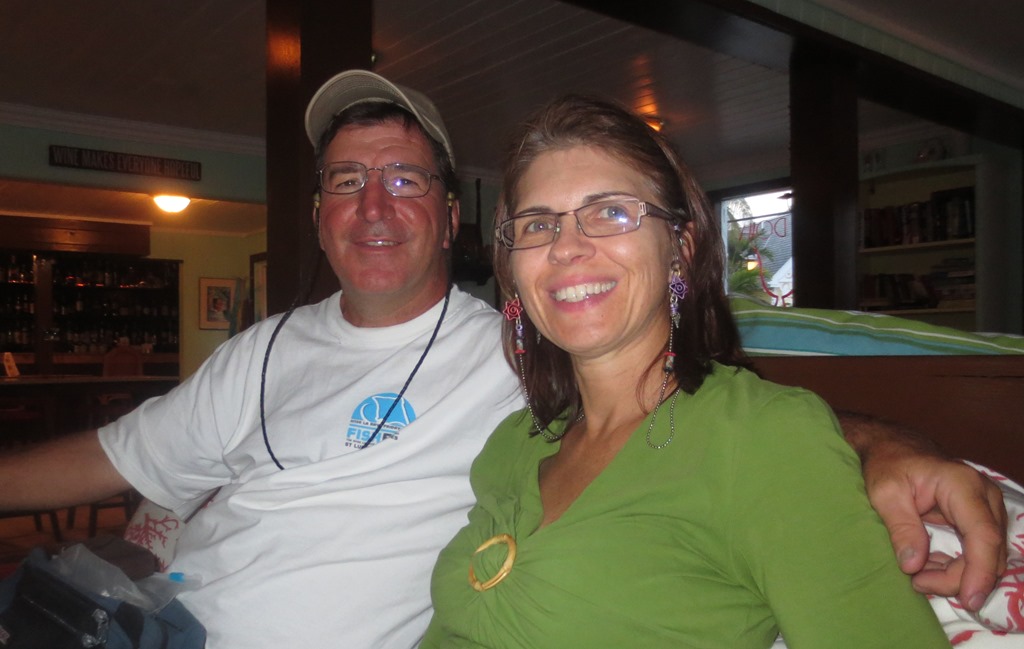 Our last day in port always consist of getting the boat back ready to get underway. Taking on fuel, water and any last minute provisions. The most important thing though is getting our “heads in the game” of handling Magnolia underway. 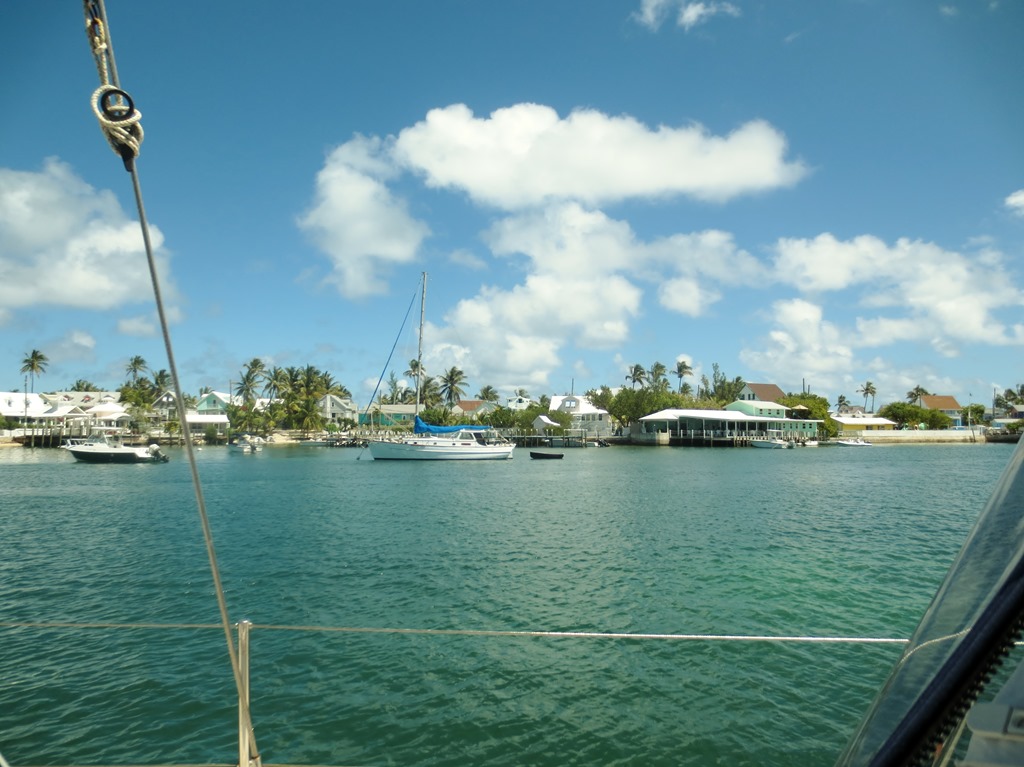 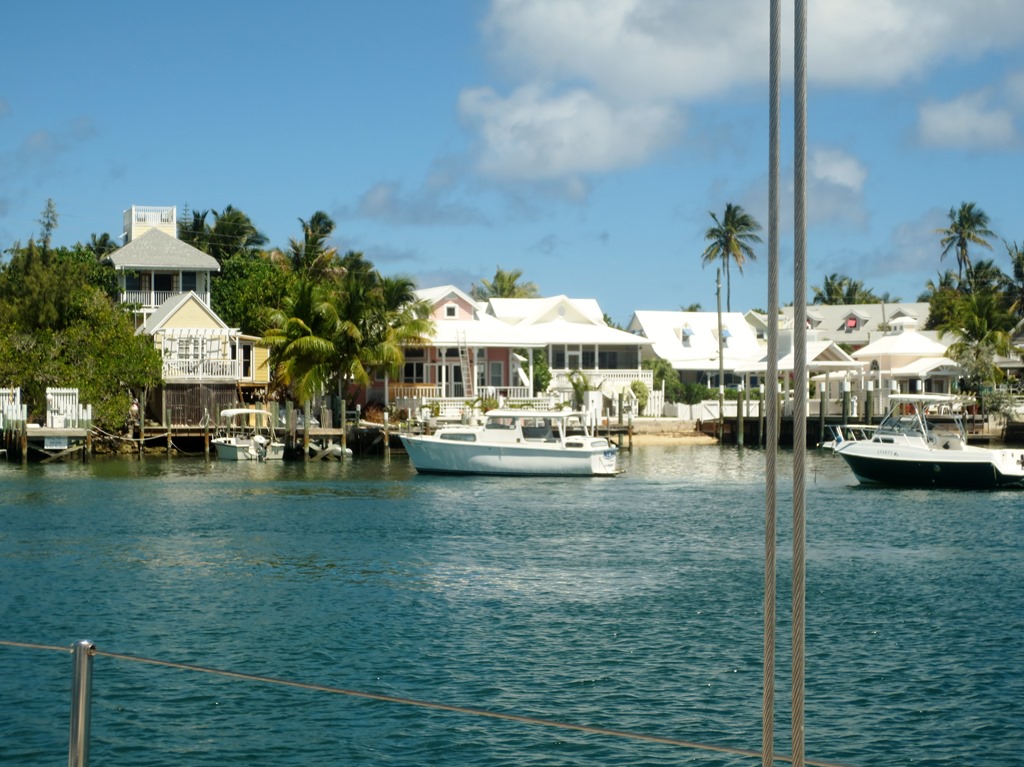 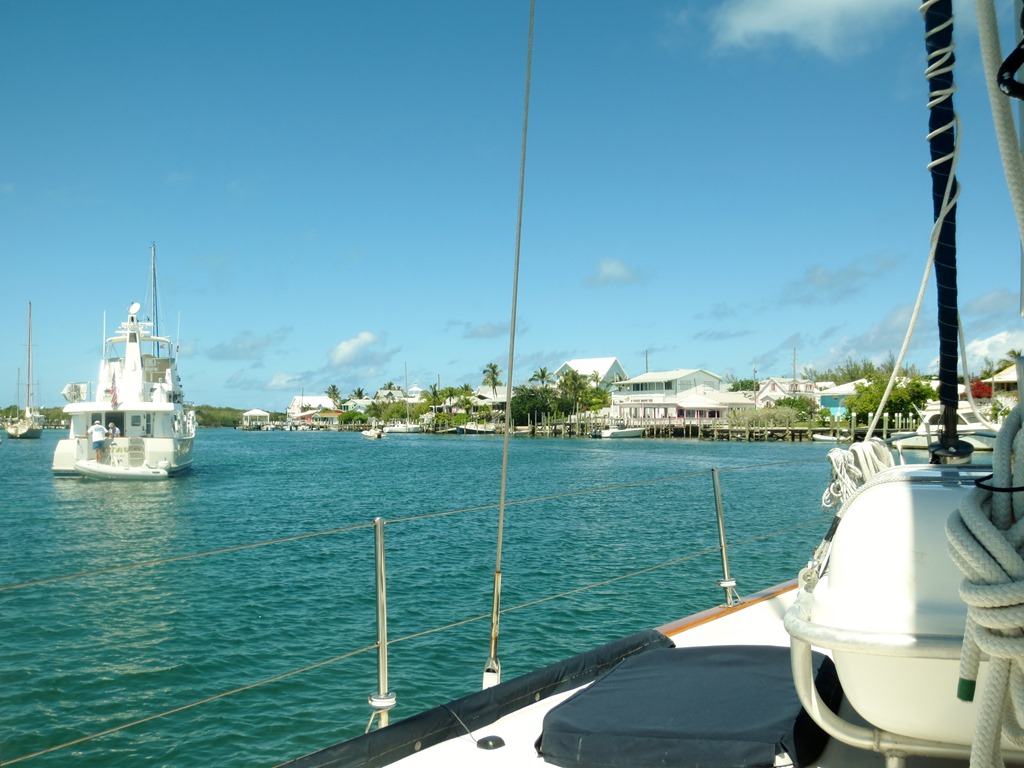 Our upcoming passage to Florida is a little different in that it will be our longest and our first crossing of the Gulf Stream at night. Does not sound like much, but there is the appropriate level of anxiety as we prepare. See you on the other side!!!