(Our approach to Camp Letts – this was the day before the main events and we still felt like we arrived late to the party!)

Annette and I belong to the the Seven Seas Cruising Association (SSCA) which holds one of their three GAMS here on the Chesapeake at Camp Letts on the Rhode River, just south of Annapolis, MD. In the “old days”  a Gam occurred when two sailing ships came upon each other they stopped yelled news and exchanged information between the ships. The SSCA format allows cruisers to exchange information among themselves and the experts in a variety of fields from weather all the way to boat systems. We had the opportunity to participate in seminars and discussions on topics ranging from weather, medical issues at sea, various boat systems operation and maintenance.

We had never heard Nigel Calder speak but I have several of his books which are very good at going into the technical details of a particular boat system. The thing I did not expect was how good of speaker he was and funny!!! I mean really funny

There were so many great speakers that on several occasion Annette and I had to “divide & conquer” on a couple occasions. As an example while I attended “Anchorages on the Intercostal Waterway (ICW) and was listening to Lin & Larry Pardey (two REAL rock stars of cruising) on how best make your boat unsinkable! In my mind that sounds like a really important topic!

The Seven Sea Cruising Association capitalize the same idea. We are lucky that one of the three GAMs are held right here in out back yard. (Rhode River just south of Annapolis. The “Super Stars” of the cruising world come and give educational and entertaining talks and discussions. 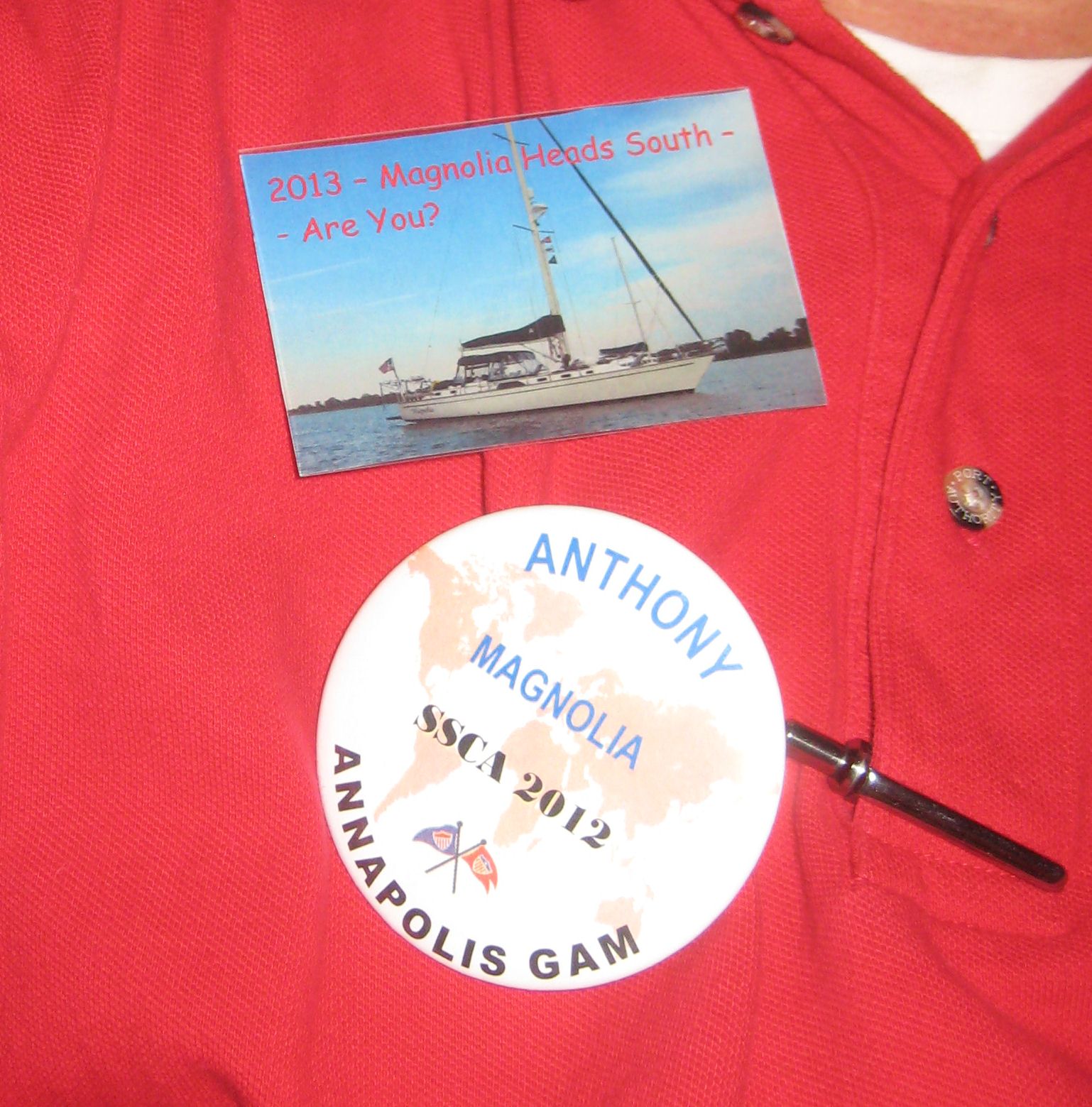 In addition we met with some attendees from last year and met some new people also planning to make the “trip south” to the Bahamas in the fall of 2013. My buddy Greg suggested I make badges which said, “Magnolia is heading south in 2013, are you?” It was a call out to “our” class of 2013!

All in all it was a very enjoyable weekend. We learned a lot and hopefully be able to hold onto some of those lessons as we get started on our own adventures! Next week is the Annapolis Boat Sailboat Show. Annette I will be attending and working at the SSCA booth on Friday and then we head on our big year end cruise right after! It is certainly fun crunch season for us!!