On Thursday Annette and I brought Magnolia from St Mary’s, MD to Solomons Island, MD, a passage of about 35 miles. Friday we arose expecting an easy departure followed by favorable west winds to carry us to our next destination, Dunns Cove on the eastern side of Tilghman Island on the east side of the Chesapeake Bay. Sounds good, huh?

Just after raising the anchor and preparing to depart the anchorage the engine died. Not good, but not the end of the world. The engine on a sail boat is called an Auxiliary Diesel for a reason! After making a quick assessment that vessel and crew were safe the trouble shooting begins. We measured remaining fuel last evening and decided to change over to the “other tank.” Bad fuel…hmmm added fuel from same same pump to both tanks and first fine, fuel should be fine. We have two fuel filters on Magnolia that we can swap in and out with a couple of valves. Whatever was in the fuel lines was now in the filters because the first one was completely clogged and the second was right behind it. We nursed Magnolia over to the fuel pier about 1/2 mile away and just before getting lines across the engine dies again! Crap, luckily we were on a good trajectory and Aelous *god of wind” smiled on us and gently nudged us pier side.  Annette did do a hell of a good job keeping us running head on to the pier. After a quick filter swap out and a couple more gallons of fuel onboard we are underway out into the Patuxent River for our trip out to the Chesapeake Bay. Note: We carry 10 spare filters onboard for just this type of situation, bad gas is just part of the experience!

As expected westerly’s did fill in nicely as we sailed along with a single reef in the main and half the jib out. As we sailed north lines of rain squalls began moving in from the west. The first got us with heavy rain and wind though we did decide we had too much sail out. As soon as the squall passed we reefed down to and rolled the jib only to watch the second to pass in front of us in the distance. The third and strongest got us square on. It was exciting but Magnolia and crew did just fine. The only troubling aspect was the loss of my 15 year old Bahamas Fast Ferry baseball cap. It is really sad because the hat had become appropriately worn and broken in after all these years. Luckily the “Yahoo News” ball cap has been in hot standby. Magnolia ended the day anchored in the Rhode River right near our home port at Galesville, MD with a rainbow. 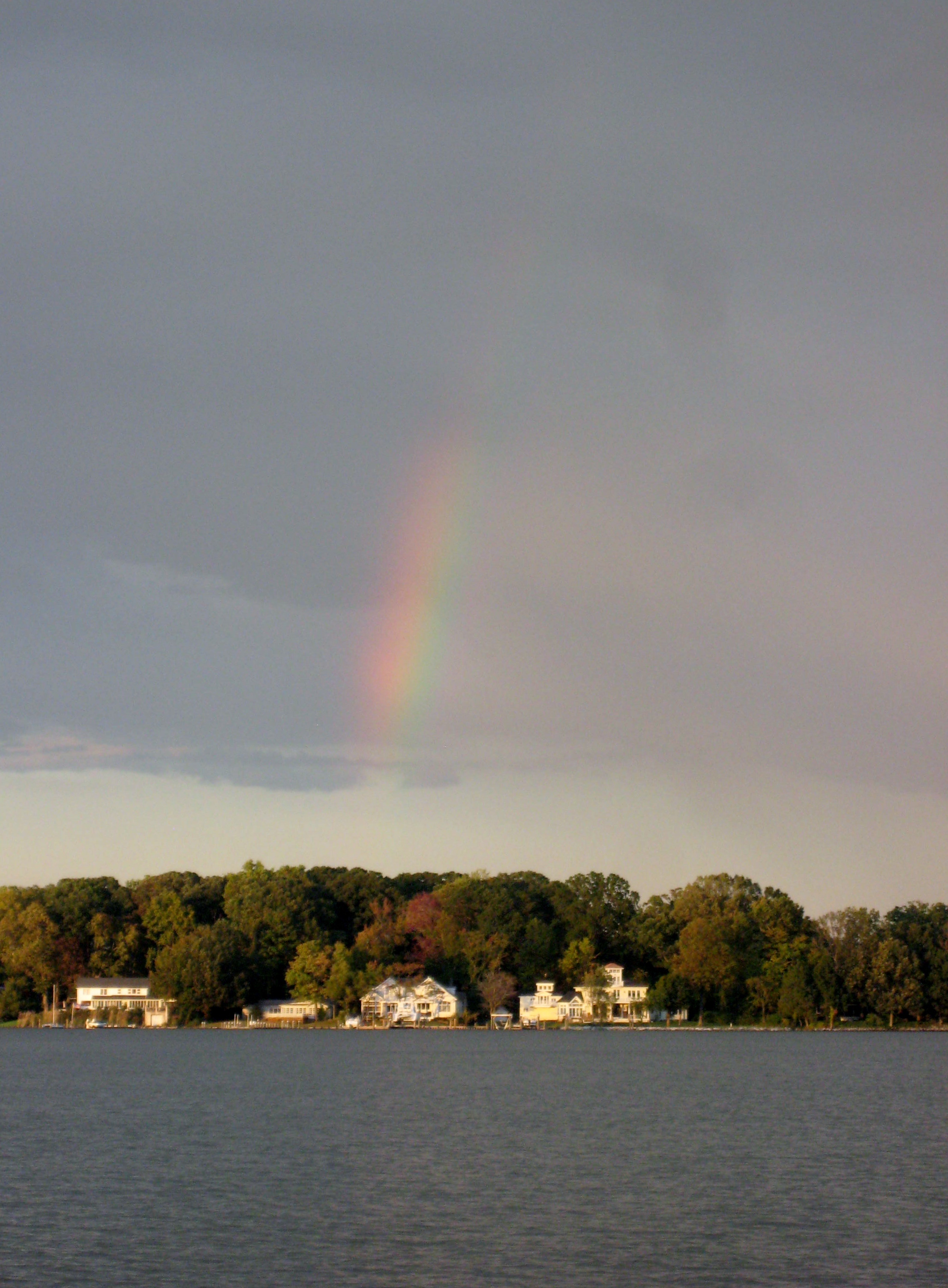 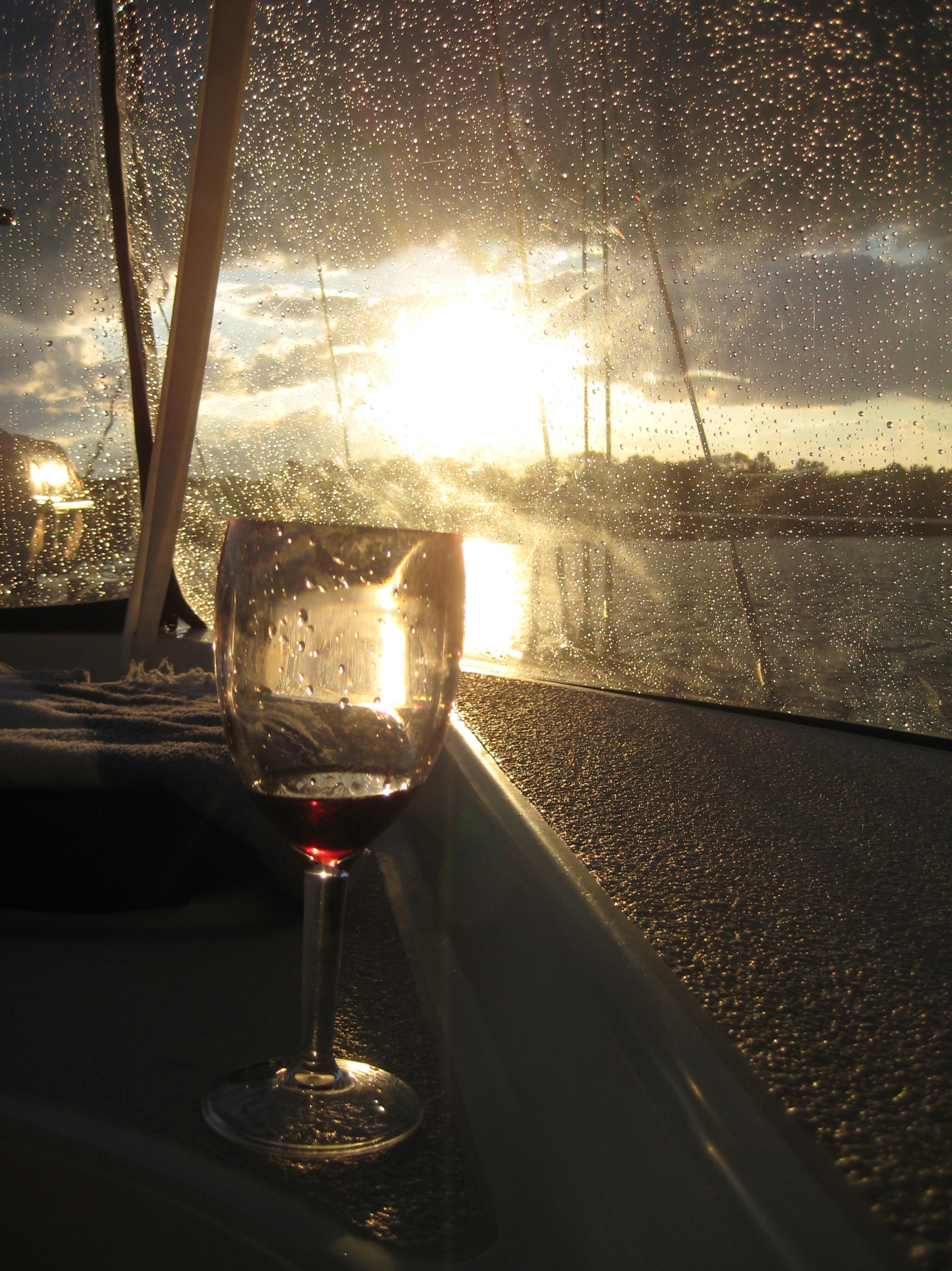 Where is Magnolia Chart??

It’s 7:30 the engine is idling the only problem, okay that might be too strong, is there is a bit of fog. We usually have coffee and a bite to eat after we get underway but today we will sit tight for a bit. It has been a busy week this far and have we have really enjoyed the anchorage here across from St Mary’s College. 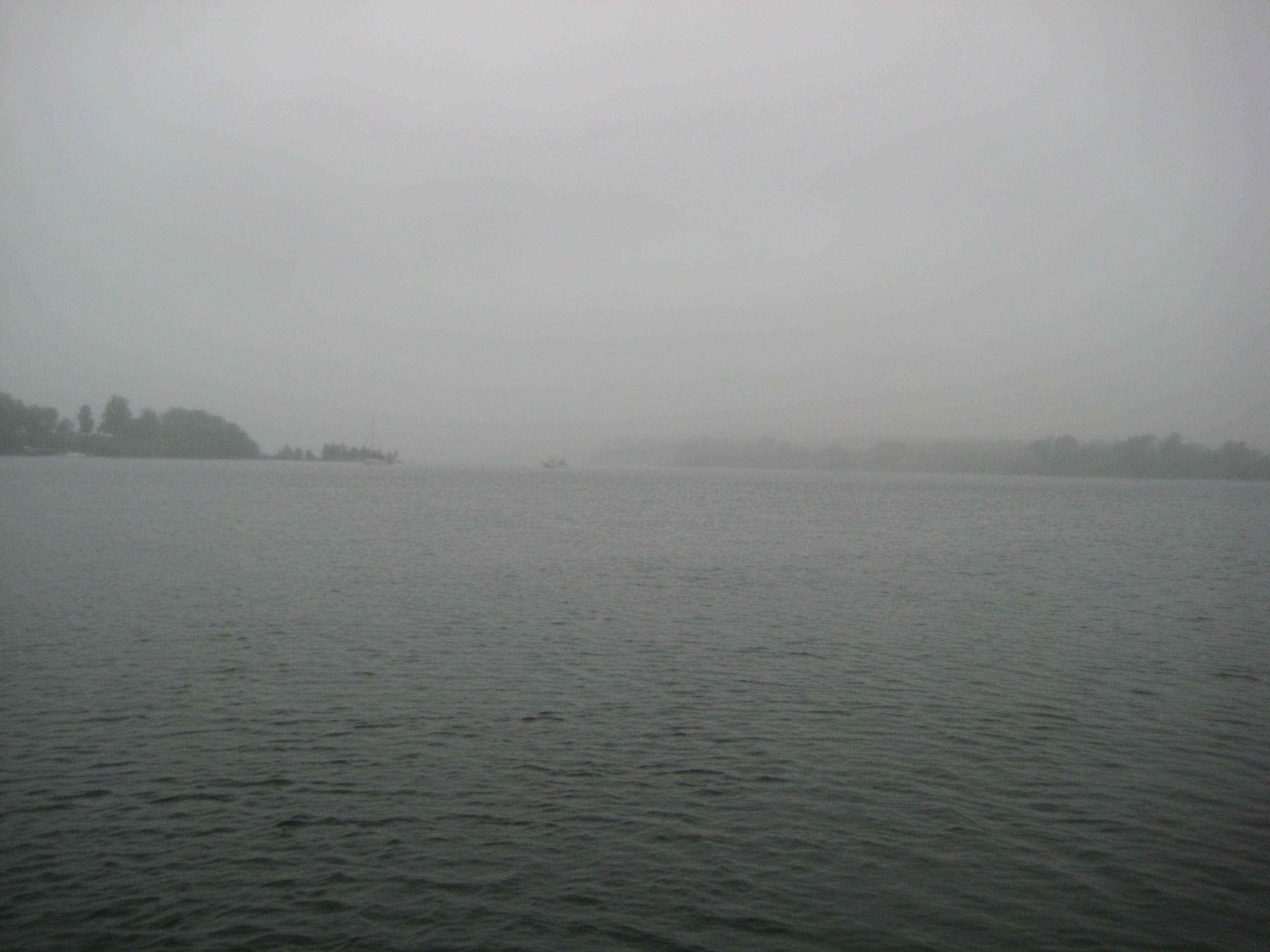 Magnolia has been sailing in the company of S/V Second Sally (Greg & Marie Rodgers) this week which has been great fun.  We all went ashore yesterday toured the grounds and enjoyed lunch in the Student Commons at St May’s College. We had a nice walk around the campus. I did not know it but St Mary’s was the first Capitol of Maryland. In 1934 the State reconstructed the original statehouse and some of the surrounding grounds as a historic attraction. It is quite nice and on being on this beautiful river only adds to it! 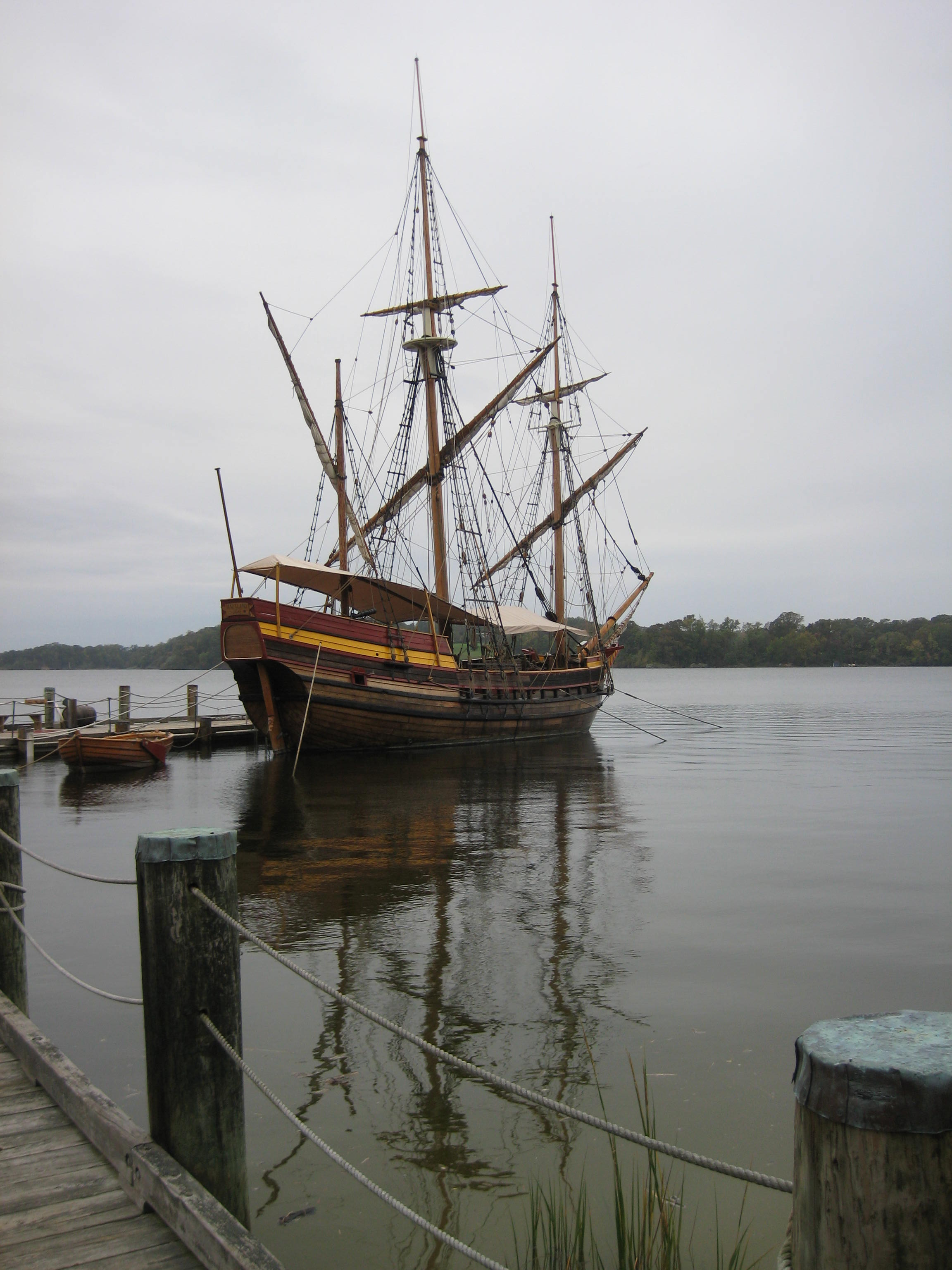 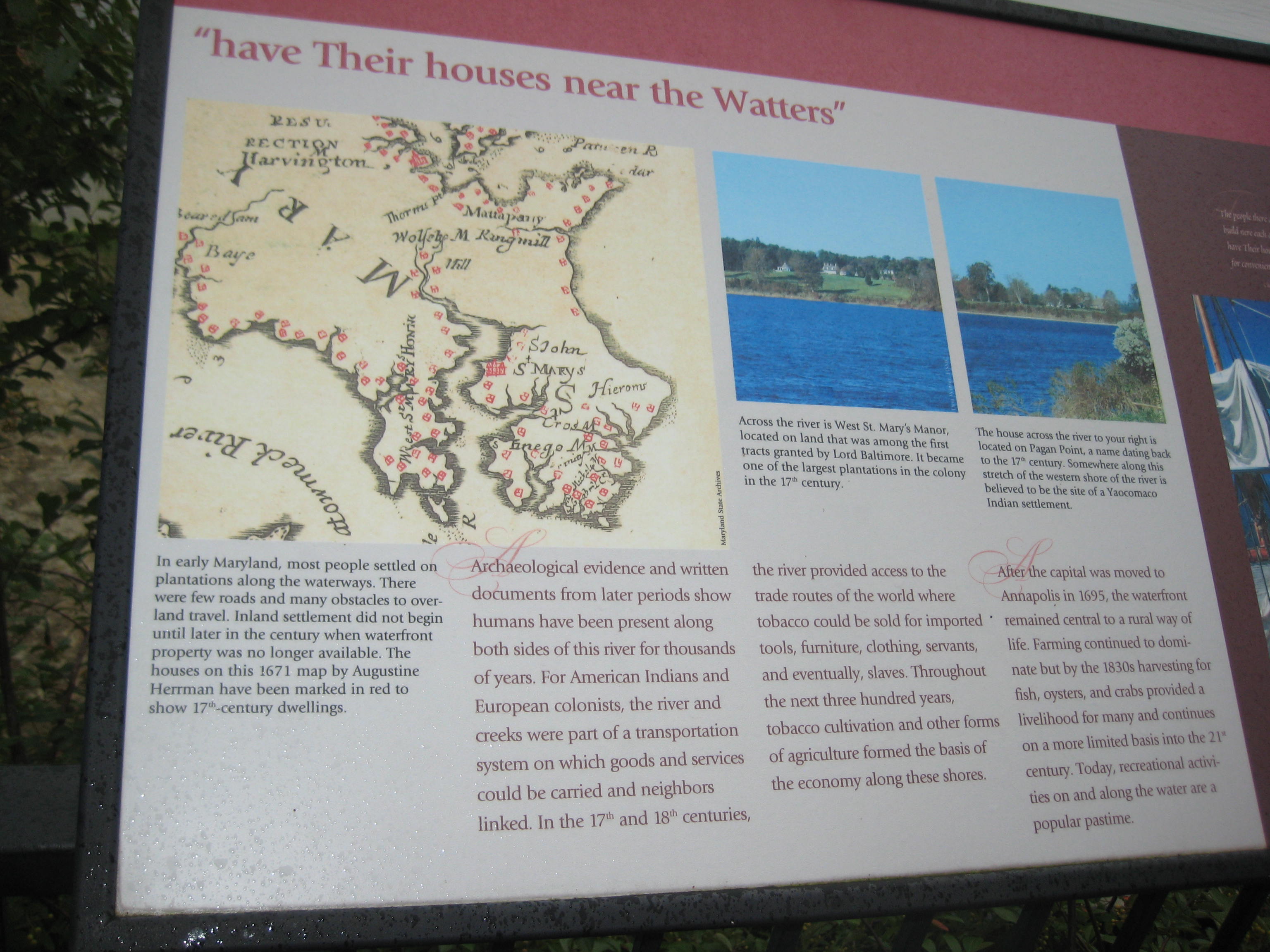 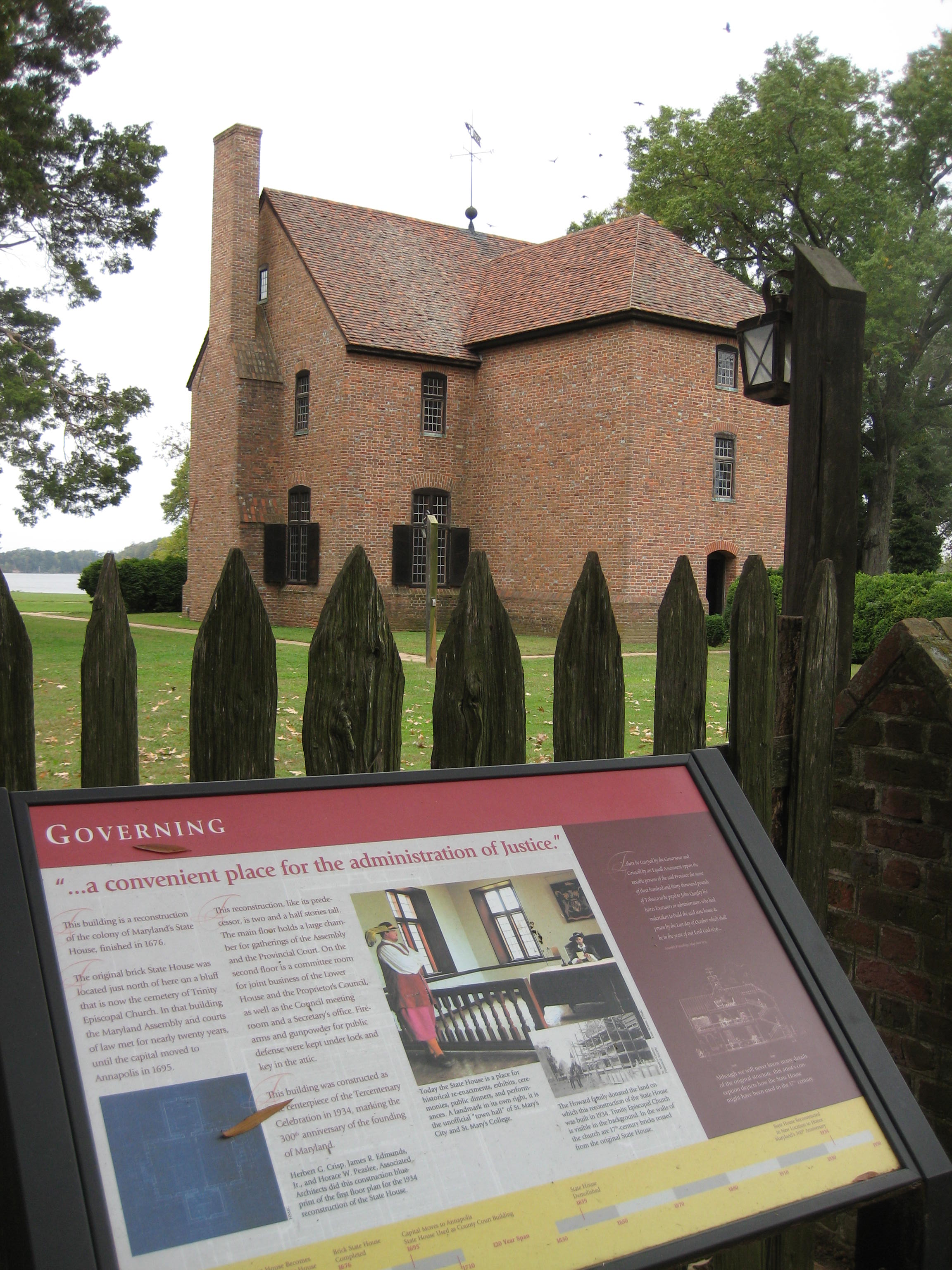 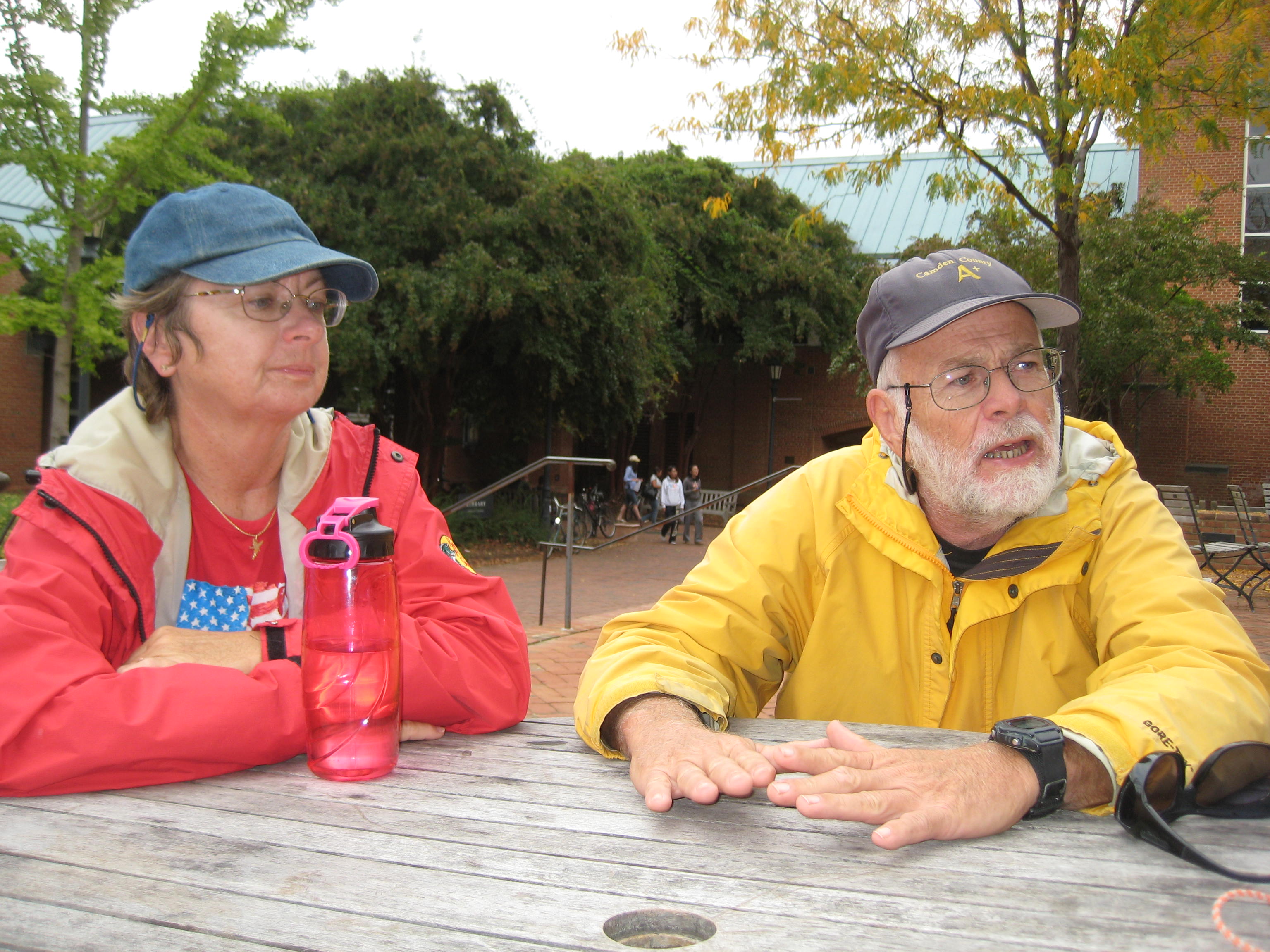 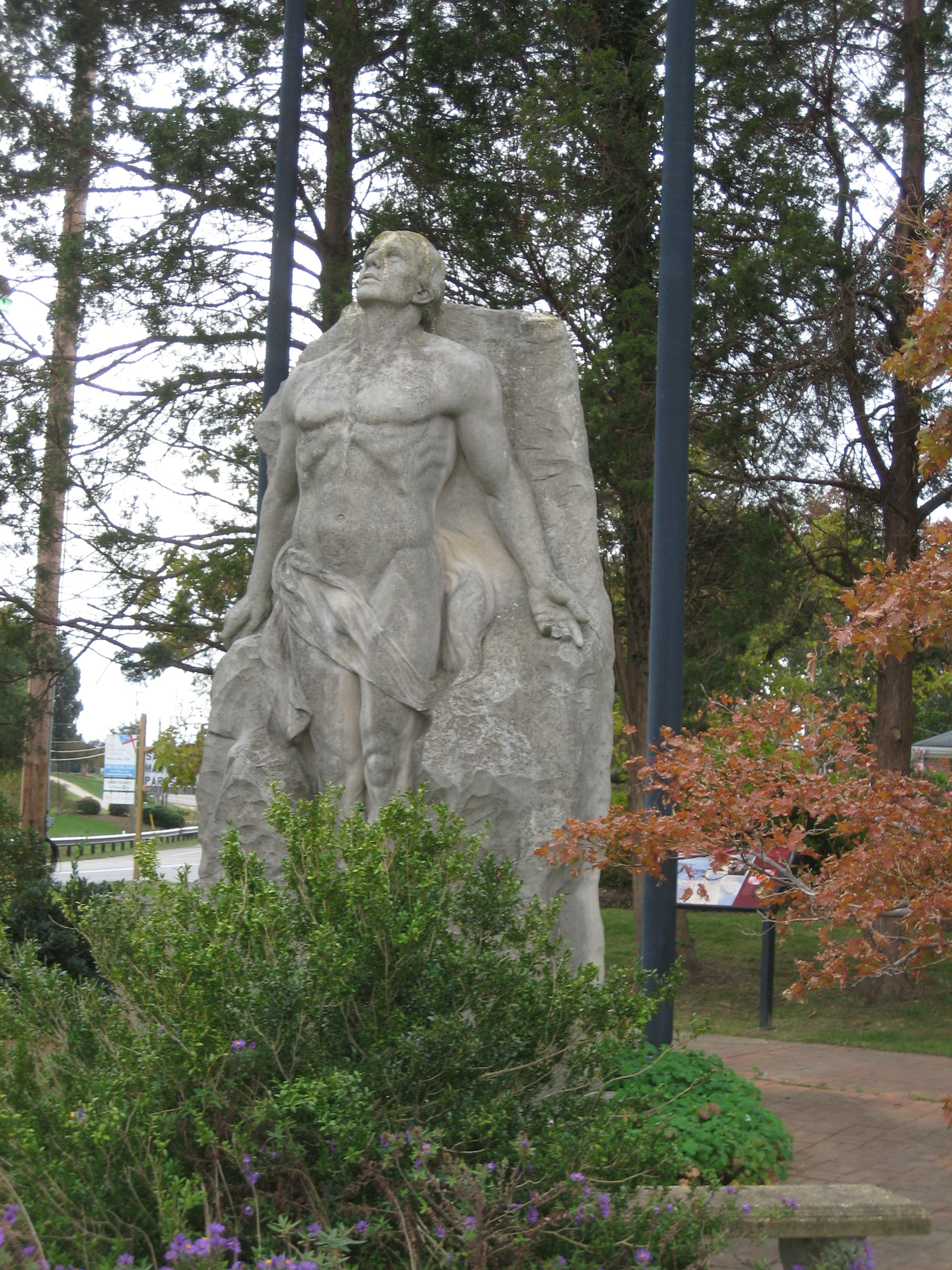 The one thing Annette and I are still getting our arms around is…when we go ashore and look out to the anchorage and see Magnolia out there, we simply have to shake our heads and ask how lucky can we be? 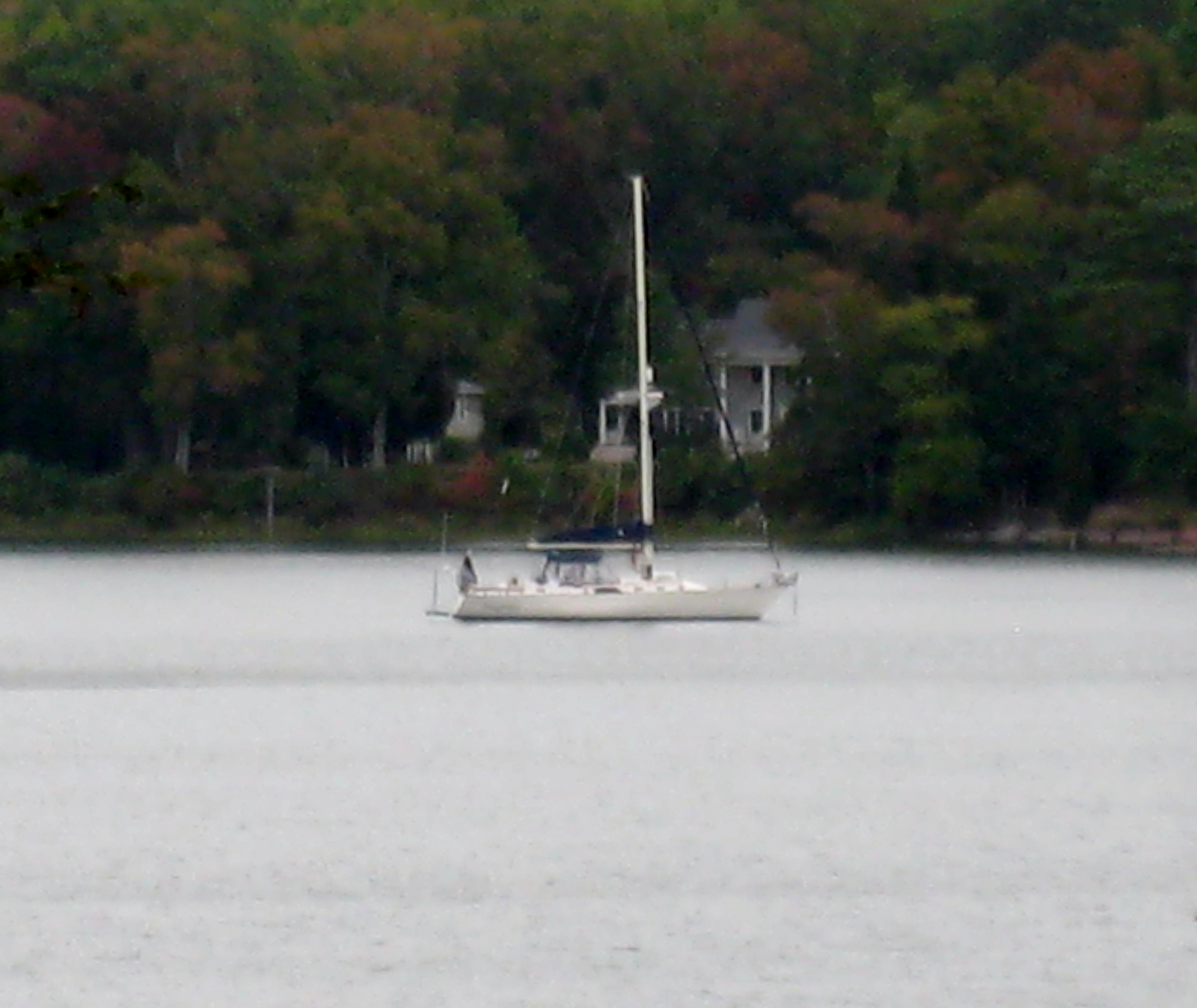 Sadly Magnolia and Second Sally will part ways today as Annette and I start our trek back north and Greg & Mare head south eventually back to the Bahamas. We are going to charter a boat in the Bahamas this winter so hopefully we will at least catch up there.

Assuming we can safely get underway this morning we will make a 40 mile back up to Solomon’s and anchor there is a beautiful cove we found while taking the dinghy around there earlier this week. The weatherman is calling for winds out of the south and that anchorage will provide us good coverage for that as well.

Magnolia and crew had a very pleasant “motor” (no wind) in the company of S/V Second Sally down from Galesville. Departing Galesville in simply beautiful fall weather there nothing of note with the exception of two A-10 Warthog aircraft deciding we look interesting to over fly and the mouth of the Little Choptank where the the fishing boats were lined up close enough there was no need to build a bridge! Just hop one to another! We will be heading on to Solomon Islands on the Patuxent tomorrow.

Starting Saturday Annette and I start our year end big sailing trip for the season and boy are we ready to go!

Our friends Greg & Marie Rodgers dropped anchor last night in the Weems Creek off the Severn River in Annapolis MD. They arrived in from a late summer trip to Maine to pick Blueberries followed by a stop in Connecticut to purchase anchor chain. I only partially jest!. Friday all 4 of us will be working at the Annapolis Sailboat Show in the Seven Sea Cruising Association booth. Saturday morning Annette & I will get Magnolia underway and rendezvous Second Sally (Greg & Marie) somewhere down the bay for dinner. We will continue south into next week where Second Sally will continue her journey south and Annette & I will return to Washington….hopefully only for a couple more years! We will be posting regularly through the weekend and into next week so follow along if you care too!

We had a planned a weekend sail with our friends the Tennar’s but unfortunately they had to cancel. In spite of the rain and cool temperature and Annette and I got underway on Saturday for a run across the bay ending up at an anchorage in the Rhode River near our homeport in Galesville, MD. In spite of overnight temperatures in the high 40’s Magnolia kept us perfectly warm. Granted we fired the gas stove oven to cook dinner, fired the 8.5Kw generator to run the hot water heater and the furnace for a few minutes before bed. We had a lovely dinner and comfy night.

Though the picture does not do it justice we were rewarded with a spectacular morning run back to our homeport in Galesville. It was a great weekend in spite of missing our friends Jack & Kathy.